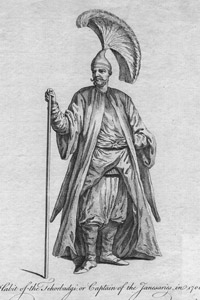 A Turkish captain of the Janasaries, circa 1700
Hulton Archive/Getty Images

The institution of slavery has a long and dark history, dating back to some of the earliest records of civilization. A slave was usually on the bottom-most rung of society, leading a dismal life of powerless servitude. Yet, at one point in history, a certain kind of slave enjoyed privilege and power surpassing most other members of his society. How could such a bizarre situation develop?

It traces back to the 14th century, when the Ottoman ruler Orhan took advantage of a loophole in the Muslim law of ghanimat. The law allowed the sultan to take one-fifth of the booty his soldiers collected in battle. While booty usually meant material things, the sultan considered human captives part of the spoils. The sultan made an elite corps of slave-soldiers out of these captives; they'd later become known as the Janissaries.

By the time Orhan's son Murad I came into power, the empire wasn't raking in the booty. So Murad looked for another way to beef up his troops. He devised a brilliant and diabolical plan to breed and train children to become slaves. From a young age, he'd instill in them an undying loyalty to the sultan. But Murad didn't want to recruit ordinary Muslim children for his slave army -- he believed that Muslim children would remain loyal to their own families and seek favors for them later.

Instead, Murad sought to kidnap Christian children from previously conquered territories to be trained for the Janissary Corps. After conversion to Islam and strict military training, these children would become loyal slave-soldiers. The sultan reasoned that these converted children would grow to despise their Christian families and remain faithful to the sultan [source: Halil].

This system of kidnapping children, known as devsirme, lasted more than three centuries and proved incredibly successful for the Ottoman Empire. The sultans selected only the children who met strict criteria, and eventually, some parents actually sought to get their children accepted into the corps.

Whenever the sultan wanted to boost his Janissary troops, he'd go into one of his territories, such as Greece, Austria, Albania or Serbia, to take young boys between the ages of 8 and 18 from Christian families [source: Volkan]. But not just any boy would do. The sultan's officials conducted comprehensive examinations of the children and looked for those who fit a certain list of criteria.

When authorities arrived in a village, fathers brought out their sons for inspection. To qualify, a boy had to be strong, but untrained. His attitude was important, too -- he couldn't act spoiled. No orphans or only sons were accepted, and neither were boys who spoke any Turkish. Even if a boy satisfied all these prerequisites, he wasn't in unless he was handsome [source: Halil]. Once a boy was chosen, he was transported to Istanbul for training.

Boys would usually undergo three to seven years of training in Istanbul. First and foremost, they were circumcised and converted to Islam. They were taught Turkish, and depending on how well they did in their training and education, they could be put on different tracks. The trainees who excelled were eventually enlisted to serve at the sultan's palace as members of the standing army. These soldiers received extensive education in math, theology, law, horsemanship and military strategy. The others were assigned to serve government officials or toil in the fields, while assimilating into Muslim society. No matter their post, they remained the sultan's slaves and could be recruited back to the palace at any time [source: Halil].

In general, these slave-soldiers adhered to a strict code of conduct, in which obedience and manners were paramount and any violation resulted in harsh punishment. In addition, they were expected to lead a celibate life, never marrying (at least until the 16th century, when some were allowed to take wives).

The total number of young Christians kidnapped under the devsirme system isn't known for sure. Modest estimates peg the number in the hundreds of thousands. But some think as many as 5 million boys were stolen from Christian families and raised to become slaves of the sultan [source: Halil].

Despite being enslaved, a young boy could look forward to remarkable prospects in his life as a Janissary.

Strict Muslims criticized the devsirme system because a ruler wasn't allowed to enslave his own Christians subjects. Supporters of the system argued that the sultan could take the children because they were descendants of conquered peoples who could be enslaved, according to the religious law. Another argument in favor of the system was that the sultan saved children's souls by converting them to Islam [source: Nicolle]

The Appeal of a Janissary Career

The practice of tearing children away from their families and cultures strikes us today as an outrageous violation of human rights. And the idea that anyone would desire a position as a slave seems completely contrary to common sense. To better understand why a loving parent would desire this life for his or her child, it'll help to grasp the idea of "slave" as it was perceived in the Ottoman Empire.

Janissaries were considered kuls, which technically means "slaves," but was understood to signify servants or even officers [source: Ménage]. At the time, the title was even more distinguished than that of a subject [source: Nicolle].

A career as a Janissary had remarkable upward mobility. We mentioned on the last page how some Janissaries received an elite education, and this advantage often prepared them for powerful and prosperous positions. For instance, an outstanding candidate immediately out of training could be assigned as a personal attendant of the sultan. After a few years at this post, he could branch out of the palace into an administrative role. But even those who didn't excel in training early on could still prove their worth and rise in the ranks. Janissaries often held high administrative positions, such as provincial governorships. There were instances, such as the case of Mehmed Pasa Sokollu, of a Janissary reaching the position of grand vizier (chief minister).

When parents saw where a career as a Janissary could lead, some thought sacrificing their children to the sultan would provide them with a better life than they could offer. Muslim parents even tried to convince authorities to consider their children for inclusion in the Janissary corps. And some Christians attempted to bribe officials to accept their sons [source: Sugar]. In fact, one of the reasons the devsirme system of recruitment came to an end in the 16th century was because there were so many applicants who desired to become a part of the Janissary troops.

Despite their technical slave status and significant power, the Janissaries often revolted throughout history. They usually sought reforms or a greater say in who would become sultan. Finally, in 1826, in an event known as the Auspicious Incident, the Janissaries revolted for the last time. The sultan Mahmud II dissolved the elite corps and turned cannons on the rebels, killing most of them.

To flaunt their distinguished roles, Janissaries often sported lavish uniforms. The sultan personally gave each Janissary an embroidered cloak, and the various regiments had their own uniform colors. They also strutted around in spectacular hats, with officers getting the biggest, grandest caps complete with long plumes.

How Attila the Hun Worked
Capitalize This! The State Capitals Quiz
The Ghosts of Gettysburg's Devil's Den