Did Vikings really have horns on their helmets? 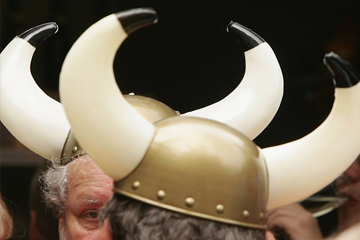 Horns look great for costumes, but how practical are they in battle?
Patrick Riviere/Getty Images

There are dragons in my living room. Sometimes my 6-year-old daughter turns into one, builds a lair behind the couch and, if you get too close, breathes fire. I blame the "How to Train Your Dragon" films. I'm lucky, though; if she were less enthralled with dragons and more interested in the human characters, I might have to spend a Saturday crafting a horned Viking helmet. But surely I'd be wrong about the look of Viking headgear, just like the movies and nearly every Halloween costume that's ever relied on Scandinavian lore for inspiration.

There's not any actual historical evidence that Viking helmets were horned. Few helmets have survived burial, and most of them yield little clues as to their design. To date, only a single Viking helmet from the 10th century has been discovered intact. The helmet looks strikingly like the Viking lids we've come to know and love, thanks to its rounded pattern meant to ensconce the top of a warrior's head in sturdy, protective iron. However, the helmet didn't have a single horn.

So why do we think it should? The romanticized notion of horned Viking helmets probably stems from artist interpretations of Scandinavian history. In the 1800s, Gustav Malmstrom, a Swedish artist, created images of Viking raiders wearing horned helmets. By the 1870s, horned Viking headgear was an integral part of the popular "Der Ring des Nibelungen" opera, thanks to Carl Emil Doepler's costume design [source: History].

These artists and designers didn't just make up the idea of horns on helmets, though. Many helmets predating the Vikings by at least a century were adorned with antlers, wings and animal horns. Some are depicted in stone carvings and sculptures, as well as on a few bronze helmets dating from about 900 B.C.E. that were found in Scandinavia. The bronze horned helmets would have been too delicate for battle, leading archaeologists to believe they were ceremonial. Horns don't seem very practical, either.

To further the mystery of the horned helmet, proponents also point to a solitary tapestry found at a Scandinavian burial site from the 9th century -- predating the Viking age -- that may have inspired contemporary Viking fashion. A figure on the tapestry is wearing a horned helmet, although it is unclear whether the figure was a representation of a Viking of the time or of a mythical figure [source: Short].

Looks like I may end up putting horns on that pint-sized helmet, after all.