by John Donovan Dec 2, 2019
This simple painting titled "American Progress" by John Gast is the artistic realization of a concept that has been at the center of the U.S. psyche for most of its existence. Wikimedia

The woman in white floats above the verdant plain, eyes turned westward, a star glowing on her forehead. She is a phantasm, hovering at the center of the oil on canvas painting completed in 1872 by a Prussian named John Gast. The work is called "American Progress."

This simple painting, less than a foot tall, is the artistic realization of a concept that has been at the center of America's psyche for most of its existence. It's right there, in the painting's subtle and brutal allegory: The woman — a white woman, with wavy, golden hair — leads a group of settlers and farmers (also all white). In her left hand is a string of telegraph wire, in her right, a book. A stagecoach and a train follow in her wake.

In front, dark skies and foreboding mountains await. A herd of buffalo rumbles away in the distance. A wild beast snarls at her feet. A band of Native Americans flees as she glides ever onward.

She is Manifest Destiny, a belief born in America's infancy and fully implemented with the country's drive West in the 19th century. Manifest Destiny was a doctrine that espoused, simply put, that God wanted Americans to take over the continent.

In a single word, Manifest Destiny was — and still is — trouble.

God Wanted America to Have Texas and California?

The term Manifest Destiny sprung from the fingers of a newspaper columnist and editor in 1845, though the basic idea had been around from the country's get-go. After all, it takes a hefty dose of self-entitlement to claim a land as your own even though millions of people already live there.

In the early days of what we now know as America, what lands couldn't be relatively easily taken (like the Indian-owned lands east of the Mississippi) were bought (like the Louisiana Purchase), split with others (later, the Oregon Country), or fought over and taken (like big parts of the West in the Mexican-American war of 1846-1848).

It was the push to annex land held by Mexico, before it was won in the war, that prompted editor John O'Sullivan to coin the term Manifest Destiny. "[It is] our manifest destiny," he wrote, "to overspread the continent allotted by Providence for the free development of our yearly multiplying millions."

Of course, there's more to Manifest Destiny than some woman in white or the encouraging hand of the Almighty. The concept was inextricably tied into the politics of the time, which were (as now) fueled by something decidedly unholy: money.

What Lies Behind the Woman in White

America's land-lust was driven, first and foremost, by the thirst for more wealth for its settlers. But distributing that often ill-gained bounty was not easy. In a time when the scourge of slavery already was beginning to rip apart the nation, the issue of how to divide the newly acquired land — which states-to-be would allow slavery, and which would not — became a political hot potato.

Declaring the land grabs a divine right seemed, if nothing else, a nice cover story for expansionists of the time. But even more than money, politics or religion, Manifest Destiny demonstrated something else about the mindset of many Americans.

"Implied in the notion of Manifest Destiny is that we know best," says Don Haider-Markel, the head of the department of political science at the University of Kansas. "And basically, when we say 'we,' we mean sort of Anglo-Saxon Protestant, otherwise known as sort of white.

"I don't see how you can escape from the notion," Haider-Markel says, "that this is a form of white supremacy."

President James Polk was a champion of Manifest Destiny and built his presidential campaign around the idea.
Public domain

Did People Really Accept the Idea?

Certainly, many people at the time believed in Manifest Destiny; that God wanted the newcomers to take over the continent, to work the land, to bring Christianity to the Indians and Mexicans, to be Biblically fruitful and multiply (as O'Sullivan put it), and, if God found it within His grace, to grow rich while doing it. Expelling more than 100,000 Native Americans from their homes in the American South, murdering thousands of others, and taking land from Mexicans was not simply accepted as a divine American right to these people. It was a duty.

But not everyone bought into that notion. Not by a long shot. Many saw the idea as little more than a dodge.

"There were people, for example, who thought that the drive to annex Texas was a ploy to gain more land to create more slave states, because eastern Texas was suitable for growing cotton," says Harry Watson, a professor of Southern culture at the University of North Carolina. "Even then, there were people who were bitterly opposed to slavery and desperately wanted to abolish it, and the first step to abolishing it might be to prevent it from growing. They did not want to admit Texas, they did not want to fight Mexico to get Texas, they did not want slavery to be allowed to spread. All of this was fought out very bitterly in Congress."

Still, politicians like President James K. Polk found it politically and economically favorable to press onward. His call to annex both Texas and Oregon (which would appeal to both Northern and Southern states) helped win him the presidency in 1845 over anti-expansionist Henry Clay, even though Polk's drive threatened war with both Great Britain and Mexico.

By the time Polk left office in 1849, Manifest Destiny was all but complete. America, barely 60 years after the U.S. Constitution was ratified, now stretched from sea to shining sea.

In historical terms, Manifest Destiny is defined only as the doctrine that increased the United States' land-holdings on the North American continent. The idea, though, is still referenced today, though it's less about expansionism and Divine intervention and more about spreading the American way of life to other places.

In that way, Manifest Destiny is a precursor to what is now termed American exceptionalism, the belief that America is "uniquely virtuous" and that its virtues (freedom, democracy, capitalism) are worthy of sharing with — or perhaps even imposing on — other countries.

Historically that has often meant more trouble; war in the Philippines, for example. Not to mention World War I, World War II, Korea, Vietnam and the Gulf Wars. America's bloody history after the country's continental expansion, which continues in places like the Middle East, shows that the idea of American exceptionalism that was so evident in Manifest Destiny still lives.

"I think the idea of Manifest Destiny supported the idea of a global role for the United States in the 20th century," Watson says. "There is still this notion that it is not only America's right but America's obligation to extend its influence over various countries. And that can work both ways, or many ways."

The woman in white presses ever onward.

NOW THAT'S INTERESTING
Despite fears from many, the expansionist Polk believed that a vast nation traversing the continent would be more easily defended and mightier than one concentrated on the Eastern Seaboard. "It is confidently believed that our system may be safely extended to the utmost bounds of our territorial limits," he said in his inaugural address, "and that as it shall be extended the bonds of our Union, so far from being weakened, will become stronger."

How Obituaries Went from Dry Death Notices to Tributes to Truth 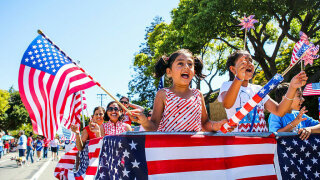 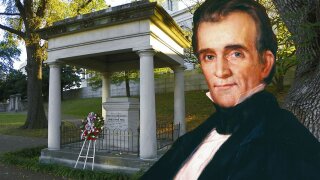