Setting the Scene for the Crusades 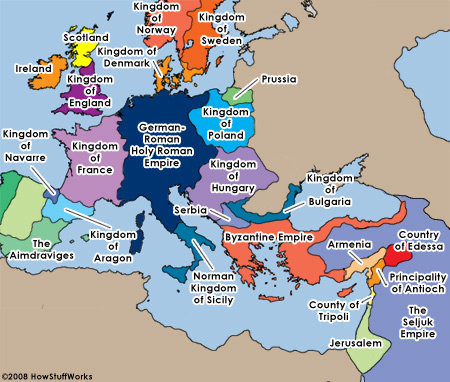 The world at the time of the Crusades
HowStuffWorks

At the end of the 11th century, Western Europe was generally a primitive, backward place, in comparison to the Middle East's more sophisticated society. Feudalism had been the main form of government for several generations, and strong monarchs and central governments were just beginning to reemerge. You can read more about Feudalism in How Knights Work.

The church was the main source of European unity at the time. For people living in Europe, life was marked by a sincere love of God that was expressed openly and often. Faith permeated every aspect of daily life, but so did fear. A lunar eclipse might be seen as a sign of God's favor, while a lightning storm was seen as a symbol of his wrath. People were scared of the ever-present temptation of sin, and they depended on the church's teachings to get to heaven.

Pilgrimages became popular practice at this time. After all, what could be more holy than standing where Christ once stood? Priests sometimes even prescribed pilgrimages as a way to perform a penance, or the act of repenting for one's sin. The city of Jerusalem had been under Muslim control since 638, but until the late 1000's, that wasn't an immense concern for the Christian world. Pilgrims were still allowed to make their journey to the Holy Land to see the site of the crucifixion and resurrection of Jesus Christ.

In the Middle East, power was shared by three entities:

Alexius I, the emperor of the Byzantine Empire, wanted to restore Byzantine control over Asia Minor and northern Syria, but he couldn't do it by himself. Feudalism in Western Europe had led to the rise of knights, so he knew where he could tap military strength. He reached out to the leader of the Western church: Pope Urban II.

Pope Urban II had several political reasons to endorse the Crusades. For one, it was a chance to mend the relationship between the Greek church in the east and the Latin church in the west. The two churches had been divided over doctrinal and theological issues since the Great Schism of 1054. It was also a move to cement the power of the papacy, which was on the rise due to the Gregorian Reform movement of the mid-1000s. Additionally, the rise of feudalism had created a lot of knights, but the knights were restless and fighting random battles to entertain themselves; a war would be a convenient outlet for their energies.

But how could the pope call for war, when the church was known for promoting peace? Learn more about his persuasive logic on the next page.