Religion in the Crusades 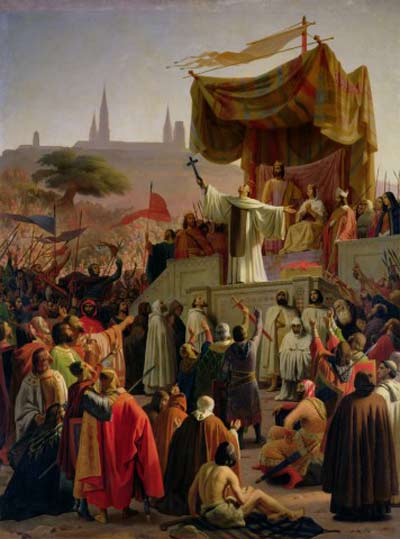 After the First Crusade, popes continued to call for Crusades; their blessing was seen as essential. After all, these battles were perceived as "God's will." Many of the Crusades would begin with a goal to reach the Holy Land, but would break down because of politics and warfare failure. Regardless, religion was always the primary trigger for a crusade.

Though religion always played a part, the perceived threat to the church evolved. The first Crusade focused solely on ridding the Holy Land of Muslim forces. But later Crusades addressed other threats to the church -- even threats at home. The popes began to use crusades to combat any perceived threat against the Catholic Church.

Take, for example, the Albigensian Crusade (1209-1229). This crusade battled heresy within the church. In the French city of Albi, a heresy called Catharism was extremely popular. Catharism held that the world was caught between spiritual and material matters, and that all material matters should be shunned. It held that Jesus Christ was God, but was never man. Cathars believed that the Eucharist was blasphemous and that the Church perverted Christ's word.

The Church sent Crusaders to fight the perceived heresy. The Crusade was fairly popular because it took place much closer to home. However, despite many Cather killings, the Cathar heresy was still present in the region for the next century.

The spirit of the Crusade was not isolated to popes and knights. The common people also caught the fever -- wanting to express their own religious devotion to the cause. The Children's Crusade (1212) wasn't an actual crusade, but is a term used to describe popular uprisings similar to the Peasants Crusade in 1096.

In one such uprising, a young man named Nicholas set out for the Holy Land. He believed that the Mediterranean Sea would dry up when he reached it, which would allow him easy access to the Middle East. As he went from town to town, all sorts of people joined his march. Another boy named Stephen also began marching; he went to the king of France, claiming he had a message for the king from Jesus Christ. He also attracted a large group of followers. Both children, though, were unable to free the Holy Land. The king told Stephen to go home, and Nicholas was foiled when the Mediterranean Sea did not part for him.

In addition to religious fervor, politics played its part in the Crusades. We'll look at how on the next page.

The Crusades gave rise to a number of religious military orders, including the Hospitallers, the Teutonic Knights, and the Knights Templar. The Knights Templar was the model for many of these orders; it was founded to protect Christian pilgrims in the Holy Land. Members were required to take vows of chastity, poverty and obedience.

As the Crusades continued, the order assumed greater military duties in defending the Crusader States. But their fame and growing wealth provoked suspicion and resentment. In 1307, Philip IV of France arrested the knights and accused them of crimes, including immorality and -- of all things -- worship of a cat.