Siege Warfare in the Crusades 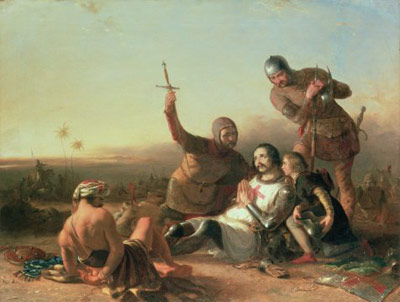 Because of the scale of the Crusades' battles and because Muslim warfare was so much more advanced, the Crusaders had to develop new war tactics. These siege warfare tactics were sometimes successful -- but in other cases, they failed completely. For example, in the Second Crusade, the crusader methods to attack Damascus were disastrous. The Crusaders could find no safe place from which to launch an attack. The western side of the city was wooded, and the enemy Turks hid in the trees. The eastern side had no trees, which left the Crusaders out in the open. After only four days, the Crusaders retreated in failure.

The Third Crusade (1189-1192) was marked by the Siege of Acre, which lasted almost two years. The Third Crusade began when the Muslim warrior Saladin drove a force of Crusaders into the hills at the Battle of Hattin. Saladin went on to conquer Jerusalem in 1187. Guy of Lusignan, who had been king of Jerusalem, headed to the city of Acre with a small army, hoping to rebuild his political fortunes.

Acre was surrounded by battlements and had a pair of huge towers, and even Saladin doubted Guy would have much success. However, Guy's soldiers pitched their camp outside the city and dug ditches and moats around it. In the meantime, reinforcements from the West began arriving. The ships brought both fresh soldiers and the needed supplies to build siege weapons. The Crusaders built massive siege towers, four stories high -- as high as the walls of Acre.

When the towers were ready, the Crusaders battled from them. Muslim archers battled back from the tops of the walls of the city. Meanwhile, foot soldiers piled rocks and brush into Acre's moat; the filled moat would provide a foundation for the towers pull up alongside the walls of Acre. The Muslims threw boulders and pots of Greek fire from inside the city, but the Crusaders had again reinforced the walls of their towers. The Crusaders also tried unsuccessfully to destroy one of the city's towers by ramming vessels loaded with combustibles into it. But due to shifting wind, only the ships were damaged.

The siege picked up again when Richard I of England and Phillip II of France arrived in 1191. The French tunneled under one of the towers and then set the supporting timbers on fire, while the rest of the army bombarded the city from outside with siege engines, such as catapults. The French named one of their catapult's "God's Own Sling." Saladin was unable to rescue Acre, and the city surrendered in 1191. The Crusaders' ability to cut off Saladin's reinforcements, while receiving reinforcements of their own, ensured the success of the siege.

Although Richard I marched to Jerusalem, his army had dwindled, and he was eager to return to England to address political matters at home. He made a treaty with Saladin that gave the Muslims control of Jerusalem, but allowed Christian pilgrims access.

So, other than the development of new siege warfare methods, what kind of impression did all this brutality and fighting leave on the world? In the next section, we'll take a look at the impacts of the Crusades.