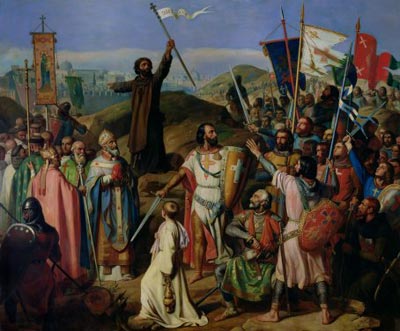 Although their exact numbers aren't known, a weakened Crusading army showed up at the walled city of Jerusalem. In addition to battle, disease and hunger had taken its toll on the soldiers, who were so thirsty at times they had killed their horses to drink the blood. The governor of Jerusalem had the advantage: he cut off the Crusaders' water supply by poisoning and blocking the outside wells, and he had the time and supplies to strengthen the towers of the city.

The Crusaders took strategic positions at the walls, but things seemed hopeless until a priest came forward and said he'd had a vision of how to achieve victory: the Crusaders should fast and march barefoot around the city. The pious Crusaders took up the task, marching while the Muslims jeered at them from behind the walls. They stopped at the Mount of Olives for a stirring sermon that lifted their spirits.

After that, things looked up for the Crusaders (and down for the Muslims). Reinforcements arrived with food and supplies -- the supplies needed to build siege weapons. What were siege weapons? Giant towers on wheels, scaling ladders, catapults, and battering rams (to open the gates), were all siege weapons. Once they were built, those towers began moving against the city's walls.

Not to be outdone, the Muslims catapulted out fire bombs, known as "Greek fire," from within the city. Greek fire was launched in pottery that shattered the fire everywhere, or in rags with nails that embedded into the walls of the tower and set it ablaze. Bales of hay soaked with oil and wax were aimed at the towers as well, but the Crusaders had nailed animal hides soaked in vinegar to the towers to repel the fire.

Finally, one of the siege towers secured a bridge into the city and took control of a portion of the wall. With control of the wall, scaling ladders were used to enter the city, which occurred right about noon on a Friday. The Crusaders noted that they were entering Jerusalem at the time of Christ's death.

Some of the Muslims took shelter in the temple area and surrendered to Crusading forces, while others continued to fight from the Tower of David, a citadel in the middle of the city. Finally, a Crusading general, concerned that he was missing out on the looting that had already begun in Jerusalem, offered to stop fighting if the Muslims would surrender the tower to him. These Muslims agreed and were allowed to leave the city, making them the only ones to survive the siege of Jerusalem.

The Crusaders spent the next night and day killing Muslims, even ones who had been granted terms of surrender. They cut open the Muslims' stomachs, after one soldier said the Muslims had swallowed their own gold. The Jews, who had sought refuge in their synagogue, were burned alive when the Crusaders set fire to it. Witness accounts talk of blood running in the streets, and body parts carpeting the city -- that is, of course, until all those body parts were burned.

This kind of slaughter strikes our modern-day sensibilities as savage and barbarous. But the Crusaders felt they were in good favor with God. They had been charged to cleanse Jerusalem from the contagion of non-Christian forces and had succeeded. The city where Christ died finally was, in the Crusaders' view, strictly Christian.

The First Crusade wasn't the only Crusade, and the Holy Land did not remain in Christian power forever. In spite of their differences in objectives and strategy, the First Crusade and the others that followed it had three things in common -- religion, politics and siege warfare. Read on to learn how each of these contributed to the later Crusades.