The Call for the First Crusade 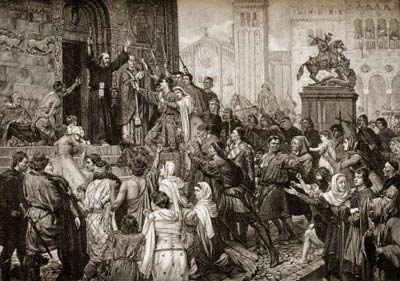 In 1095, Pope Urban II sent out the word that he was going to preach at the Council of Clermont, a meeting of priests and laymen. Other church business had already been conducted by the time Urban II took the pulpit, including a ratification of the "Peace of God" canon, which was the result of a peace movement that had been developing in the church, particularly in France. The canon called for a truce in the name of God to stop warfare and assaults against defenseless beings.

When Pope Urban II spoke, the crowd was so large that the sermon was moved outside. Several versions of the speech circulate, but most report the pope's accounts of torture, decapitation and forced circumcision the pilgrims were suffering in the Holy Land. He called upon the warrior knights to stop disturbing the peace at home and turn energy to the holy cause of helping the East.

Then Urban II played the trump card for Christians: he announced that recovering Jerusalem could substitute for a journey of penance. Such a promise incited the audience -- a group of individuals horrified of hell and desperate for the redemption of sin. "God wills it! God wills it!" they chanted. They were going to war.

But wait: How could the Council of Clermont incorporate both a call for peace and a call for war? To the church and its followers, the two calls were essentially one and the same. War would ensure peace, would relieve the suffering of the Eastern Christians. The pope and his people viewed the war as defensive, because the pilgrims and Eastern Christians were under attack.

Preparations began at once. Pope Urban II decreed that soldiers fighting for God would be marked with the sign of the cross. Ceremonies were held in which knights took vows and took the sign of the cross to wear in battle. Then the knights raised funds for their trip by mortgaging property and liquidating assets. Serving as a knight was not cheap, and the cost of service could sometimes be five to six times as much as a knight's income.

Both Urban and Alexius, however, got a little more than they bargained for. The two men had thought only the knights and trained military would join the cause; that was, after all, their job. However, Urban's preaching inspired more than just its target audience. Entire families started marching to Jerusalem immediately in what was known as the Peasants' Crusade.

The Peasants' Crusade was led by charismatic preacher Peter the Hermit. The poor were able to mobilize quickly because they didn't have any reason to stay and they didn't bother with fundraising. Instead, a mob with no means to attain food and supplies headed out, and inevitably wound up causing the problems one would expect from an unruly, hungry mob. In Hungary, they rioted over a pair of shoes, which resulted in hundreds of Hungarians being killed. The peasants pillaged towns and the countryside, killing anyone who got in their way, including Christians. They stole lumber to build boats and stripped lead from the roofs of churches.

When the peasants reached Constantinople, Alexius I tried to persuade them to hold off until more organized branches of the army could arrive. But the peasants were ready to prove themselves to God and marched anyway to Nicea. A ragtag army on foot with no armor was a rather easy target for the Turks; most of the peasants were slaughtered easily. The Peasants' Crusade was helpful to the Crusaders in one regard, though: After easily defeating the peasants, the sultan Kilij Arslan was unconcerned when he heard that more armies were coming.

What happened when the armies arrived? Find out on the next page, when we look at the bloody battles of the First Crusade.