The Reason for the Berlin Wall 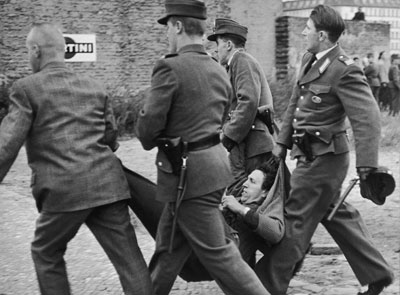 The Berlin Airlift did nothing to defuse tensions between the East and West in Germany. Berlin was an especially tender spot, because it was the only gap in the Iron Curtain. People in West Berlin could fly out of the city freely. While the border between East Germany and West Germany was closed, there was nothing to stop East Germans from entering West Berlin and fleeing (or defecting from) communist rule. Huge numbers of them did leave. By 1960, tens of thousands of people were leaving every month. In 1961, more than 200,000 East Germans had defected by summer.

West Germany wasn't happy to see this number of people leaving the East. Not only did it create an incredible economic strain, it increased tensions between East and West to an unbearable level. It seemed that an outbreak of violence was inevitable -- no one knew what to do about the situation. The solution came from the Soviet politburo (the executive committee of the USSR) and Soviet premier Nikita Khrushchev. The orders technically were issued by German communist party leader Walter Ulbricht, but he was basically a puppet of the Soviets.

On the night of Aug. 12 and 13 in 1961, the borders between East and West Berlin were closed, along with all the rail stations. Thousands of East German soldiers guarded the border while workers began constructing barbed wire fences. Construction began at about 1 a.m. -- streetlights were turned off so no one could see what was happening. The city of Berlin was being walled off, and the residents had no idea it was happening until morning. Neither did Western leaders. President John F. Kennedy was taken completely by surprise.

Most residents of Berlin were stunned and outraged when they realized what had happened. Those in the East had few ways to express their anger under the thumb of communist rule and the ever-watchful Stasi, the East German secret police. Since the Berlin Wall was still really just a fence that morning, and incomplete in many places, some East Germans ran through the gaps or hopped the fence, realizing it was their last chance to reach the West. Even East German soldiers defected.

West Berlin was more demonstrative in its displeasure. Crowds were gathering along the border. There were demands that the U.S. step in and stop the building of the wall, which clearly and openly violated the Yalta agreements and subsequent treaties. But the fear of nuclear war prevented the U.S. and NATO from responding with military force. Strong words were pretty much the only consequences faced by the Soviets for putting up the wall, and in private, many political leaders were relieved that the wall had been built. It created stability, even at the cost of freedom, in a region that had been dangerously close to erupting into chaos. Nevertheless, West Germans were angered that their NATO allies had seemingly abandoned the citizens of West Berlin.

In the next section, we'll look at the wall itself.