Leading Up to The Fall of the Berlin Wall 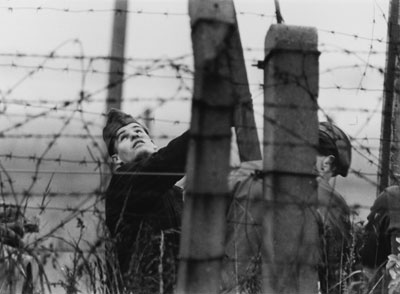 In 1985, Mikhail Gorbachev took control of the Soviet Union. He realized that the old Soviet ways were choking the economy of the USSR and all the other Eastern Bloc countries. He instituted several policies meant to stimulate economic reform. One such policy, glasnost, allowed Soviet citizens greater opportunity to voice discontent with their government. Whatever his goals, Gorbachev had opened the crack that would eventually bring down the Berlin Wall and the Soviet Union itself.

The first hammer blow to the Berlin Wall was the Sinatra Doctrine. Formerly, the Soviets had ruled over their Eastern Bloc allies closely, forcing them into lockstep with Soviet communist policy. The Sinatra Doctrine (named after singer Frank Sinatra's famous song "My Way") allowed the Eastern Bloc governments to make their own decisions to a far greater extent. This led directly to the second hammer blow: the opening of the Hungarian border.

Hungary, like all other Eastern Bloc nations, had maintained a closed border with its western neighbor, Austria, as part of the Iron Curtain. In 1989, Hungary began to allow people free passage to Austria. East Germans quickly realized that they could freely travel to Hungary, since it was an Eastern Bloc nation, and from there they could escape to the West. Trainloads of them crossed the border, thousands every day. East German efforts to put a stop to it were futile. Meanwhile, opposition to Soviet rule was growing in other places, such as Poland and Czechoslovakia.

The third hammer blow fell inside the churches of East Germany. In most East German cities (especially Leipzig), small groups gathered to discuss opposition to the Soviets and to hold small protests. The small protests grew. Soon, every city in East Germany was thronged with peaceful protesters in the tens of thousands. In East Berlin, a group of intellectuals and students formed a group called Neues Forum (New Forum) that pressed for reforms within East Germany. Yet East Germany's leader at the time, Erich Honecker, was a hard-line communist who refused to consider reform as an option. Honecker was eventually replaced by party leaders with a more liberal communist. The marches in East Berlin were 500,000 strong by then. It was clear to all observers that a momentous event was going to occur: Freedom was going to win the Cold War.

In 1987, U.S. President Ronald Reagan gave a famous speech near the Brandenburg Gate in which he demanded that the Soviets remove the Berlin Wall:­