The Berlin Wall Itself 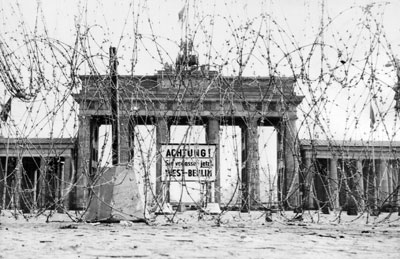 Barbed wire in front of the Brandenburg Gate, circa 1962. The sign warns that if you pass this point you leave West Berlin.
John Waterman/Fox Photos/Getty Images

The Berlin Wall wasn't built all at once. It evolved from a barbed wire fence to a pair of 12- to 15-foot (3.7- to 4.6-m) concrete walls studded by guard towers and gun emplacements. The walls were topped by a round tubelike structure that made it difficult to get a handhold. Some areas were strewn with land mines. Angular chunks of steel known as tank traps were placed in key areas to prevent vehicles from driving through the wall or any gates in the wall.

Before people ever reached the wall, they first had to contend with rows of coiled barbed wire. Powerful search lights swept over the entire area, even lighting up the west side of the wall. The gap between the two walls, which was 30 to 100 yards (27 to 91 m) wide, created a no-man's land that was patrolled by tanks and soldiers. Guards marched and military vehicles drove up and down a concrete road in the "death strip," which allowed them to respond quickly to any escape attempts. To improve visibility for the guards, sand or gravel was kept neatly raked to show footprints and the wall was painted white. On the western si­de, West Germans could walk right up to the wall itself, and they decorated it with graffiti.

In the 1980s, advances in technology allowed for automated security systems at the wall. Some areas were trapped with trip wires. Anyone who walked into such a wire would trigger a spray of bullets from an automatic gun emplacement, or the detonation of a nearby land mine. If escapees themselves were armed, the guards could fire on them from the protection of concrete pillbox fortifications.

East German guards watching over the Berlin wall during Queen Elizabeth and Prince Philip's visit on May 29, 1965.
J Wilds/Getty Images

The Berlin Wall completely surrounded West Berlin, running for a total of 96 miles (154.5 km). The portion that split East Berlin from West Berlin ran for 29 miles (46.7 km). The wall was made in sections of concrete reinforced with steel mesh. There were 116 watchtowers on the wall, and they were manned 24 hours a day by armed guards. It took a force of 10,000 guards to maintain the watch.

Despite the elaborate security measures, the Berlin Wall wasn't a seamless blockade. There were eight gates in the wall that allowed passage between East and West Berlin. For the most part, Westerners could travel in and out of East Berlin freely. East Germans needed special permits to travel into West Berlin, and these were relatively rare. Several train lines ran across the wall -- in fact, a few Western train lines passed through sections of East Berlin on their routes. They were required to pass by the closed East German train stations without stopping. There were also gates in the wall between West Berlin and the rest of East Germany.

I Am a Jelly Doughnut

In 1963, U.S. President John F. Kennedy made a famous speech in West Berlin, declaring that "all free men" were residents of Berlin, including himself. He then spoke the German phrase, "Ich Bin Ein Berliner!"

Contrary to popular belief, he didn't misspeak. The word Berliner can mean two things in Germany: a resident of Berlin, or a pastry similar to a jelly doughnut. Which meaning is intended can be derived from the context -- in this case, it was clear that Kennedy wasn't talking about snack foods. But it had been only two years since the building of the wall, and many West Germans couldn't stomach the man who they felt let it happen saying that he was one of them. They mocked his words by emphasizing a meaning he never intended: "I am a jelly doughnut."