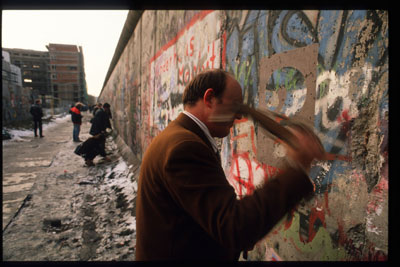 An unidentified man removes pieces of the Berlin Wall with a hammer Nov. 27, 1989, in East Berlin.
Stephen Ferry/Getty Images

The official opening of the border with West Berlin occurred in a strange, confused way -- not much of a hammer blow at all. On Nov. 9, 1989, an East German official announced that East Germans would be allowed "permanent departure" or travel abroad. They could get passports or exit visas freely. No one was sure what this meant, exactly, and the language barrier between the official and foreign reporters confused things further. German media outlets broadcast news that East Germans could travel freely, so thousands showed up at the wall, waiting at the gates and pressing forward as their numbers grew. The guards had no idea what to do, because no formal announcement had been made as to the wall's status. Finally, more to prevent a riot than for any other reason, the crowds were allowed to surge forward. They crossed the wall and freely entered West Berlin for the first time in almost 30 years.

What followed was a two-day long party in the streets of Berlin. People began taking hammers and chisels to the wall, tearing it down piece by piece (and saving many pieces for souvenirs -- you can still buy them in German gift shops). Thousands of hammer blows finally destroyed the wall. Every East German who entered the West was given a "welcome gift" of 100 marks -- about 800,000 of them crossed over on the first day.

Once the exuberance had faded, Germany got down to the difficult work of reuniting the two halves of the country. There were many problems to overcome, and many Germans didn't want to reunite the two countries at all. The economic problems of the East had to be absorbed into the West, including the conversion of the nearly worthless East German currency into West German marks. There are still problems in Germany to this day related to reunification: Unemployment is high in the East, which has lead to a resurgence of antipathy toward immigrants and outsiders, and the economy of the West is drained by subsidies for the poorer East. Yet Germany is now one nation, one of the most important members of the European Union and a respected, growing economic power.

The longest surviving piece of the Berlin Wall is a stretch called the East Side Gallery.
Photo by Kurt Vinion/Getty Images

Today, sections of the Berlin Wall still exist, brought out occasionally as art exhibits or museum pieces. The small shack used by American soldiers to guard Checkpoint Charlie stands as the only memorial to that border crossing, while the neoclassical columns of the Brandenburg Gate no longer stand within a barbed wire "death zone."

For more articles and information on the Berlin Wall and oppressive government, try the next page.