Living In the Shadow of the Wall 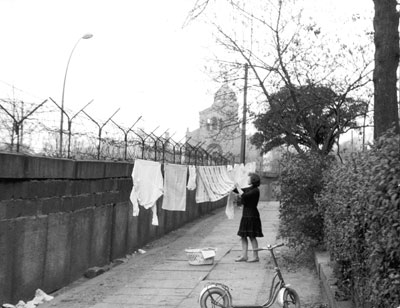 A German women hangs clothing out to dry on a line strung between a tree and the Berlin Wall, Nov.13, 1963.
Express Newspapers/Getty Images

Before the Berlin Wall was built, many Germans suspected the border would be closed eventually. Some East Germans planned to move to the West, and took steps to make the move easier. Some residents of East Berlin took jobs in West Berlin. In some cases, fathers or mothers rented apartments on the other side and began saving money so their families could soon join them. When the wall went up, families were split apart. People who had spent the night in East Berlin, perhaps visiting friends, couldn't return to their homes in the West. They were stranded.

In a few places, apartment buildings made up part of the Berlin Wall. At first, people could simply enter one of these buildings, walk out a back door or window and enter West Berlin. But then all exits on the lower floors were bricked up, so people began jumping from second- and third-story windows, usually into blankets being held by West Berliners below. Eventually, these escape routes were also bricked over.

The East German guards were given orders to prevent anyone from crossing the border, using force if necessary. There was some dispute over whether the guards had official shoot-to-kill orders, but documents surfaced years later proving this was true. Günter Litwin was the first person killed while trying to escape, shot by East German soldiers. One of the most dramatic deaths was that of Peter Fechter. In 1962, he was shot by border guards, who left him to bleed to death slowly in broad daylight. The total number of civilians killed trying to get across the wall is in dispute. Some sources claim 86, while some claim 239 or more. The number is almost certainly more than 100. Even pregnant women were shot to death trying to escape.

An East Berlin youth being helped down from the Berlin wall by two West Berlin police officers after he climbed to freedom.
Paul Schutzer/Time Life Pictures/Getty Images

Life on either side of the wall was very different. West Germany was thriving economically, and West Berlin was no exception. Theaters, zoos, museums, shops and nightclubs lined the main streets. East Berlin was a typical communist city. The economy was depressed by the loss of so many educated professionals and the looting of the city by the Russians. Most buildings were drab, gray and nearly identical to each other. Citizens there could afford few luxuries. But the economic and aesthetic conditions weren't the worst problems. It was the atmosphere of fear that drove so many East Germans to flee. No one could be certain who was a member or informant for the Stasi. People were regularly taken in for questioning and often jailed for speaking out against the government -- or if a neighbor simply claimed that they had.

Up next: The wall begins to fall.

A tense standoff occurred at as a result of an incident involving an American official. Soviet and U.S. tanks sat facing each other on either side of the border, with weapons loaded, for roughly one day. Politicians then ordered the tanks to stand down. This incident, combined with the death of Peter Fechter, helped give international notoriety.­