What Came Before: Berlin Wall History 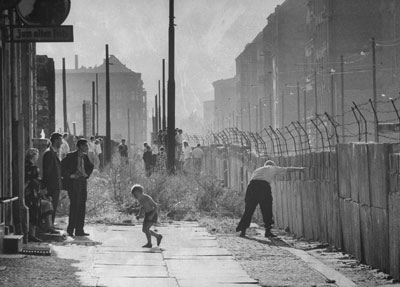 The events that would lead to the building of the Berlin Wall began in World War II. Nazi Germany was originally allied with communist Russia against the Allied nations of France, Britain and the United States. But Hitler violated his treaty with Russian ruler Joseph Stalin and invaded Russia, pushing the Soviets into an uneasy alliance with the other Allies. Although they were fighting on the same side in the war, the Soviets and the other Allies had very different ideologies. The Soviet Union was a communist nation, a system in which individual rights are subverted for the benefit of the nation. It was also a totalitarian system, which meant that the government controlled everything and there were no elections.

On May 7, 1945, Germany surrendered the war, Hitler having killed himself days earlier. The division of Germany had been decided at a conference in Yalta in February 1945. Stalin, Churchill and Franklin Roosevelt, the leaders of the three main Allied nations, decided that Germany would be divided into four zones, one each for the Soviets, Americans, British and French. Berlin, Germany's capital, was entirely within the Soviet zone. The city itself would also be divided into four zones. France, the U.S. and Britain were guaranteed access to their zones in Berlin, even though they had to pass through the Soviet zone to get there.

The differing ideologies of the Soviets and their former allies became apparent almost immediately. Soviet troops occupied much of Eastern Europe and began installing communist governments in Poland, Hungary, Czechoslovakia and other nations. The Soviet-controlled portion of Germany, known as East Germany, was also the recipient of a Soviet puppet government. Many well-educated people, such as doctors, intellectuals and engineers, became the first to flee the harsh authoritarian rule of these countries. The Soviets didn't want to lose these valuable citizens, so they began closing the borders of these "Eastern Bloc" (also known as Soviet Bloc) nations. This enforced isolation from the west became known as the Iron Curtain.

The Western nations weren't happy. After fighting a war to free the people of Europe from the Nazis, half of them were once again living under dictatorships. However, both the Soviets and the U.S. had atomic weapons. For one side to challenge the other side openly could lead to a military conflict and nuclear destruction on a massive scale.

Nevertheless, tensions kept rising. Both sides spied on each other, made speeches condemning each other, built up massive weapon stockpiles and sent troops to areas near contested borders. France, Britain and the U.S. had merged their zones in Germany into a single zone, a democratic republic known as West Germany. As a result, West Berlin became an island of freedom and democracy in the midst of communist East Germany.

The Soviets used harassment tactics to try to drive the Allies out of West Berlin, including kidnappings, delays, bureaucratic tie-ups and misinformation campaigns. Finally, in June 1948, the USSR cordoned off West Berlin. No rail or road traffic was allowed in or out. They hoped to starve the city.

The effort failed. Britain and the U.S. flew cargo planes through narrow flight corridors over East Germany, landing in West Berlin with supplies. It required a nearly miraculous feat of logistics, with planes taking off from supply depots every 30 seconds, 24 hours a day. The Berlin Airlift was maintained for almost 12 months, keeping West Berlin supplied enough to survive. At its peak, the airlift delivered more than 200,000 tons of cargo per month. The Soviets finally gave up, allowing truck and rail traffic to enter West Berlin once again.

Next, we'll find out why they built a wall through the middle of a city.