Once Upon a Time at Versailles: Before the French Revolution 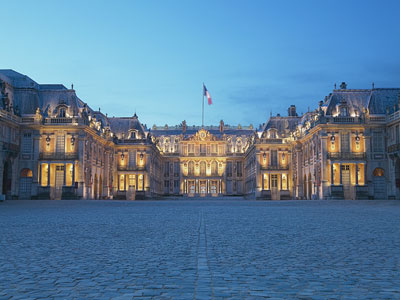 The Palace of Versailles was an opulent haven from the squalors of Paris.
Iconica/Getty Images

The Palace of Versailles, in all its gilded architectural glory, was completed by 1682. Louis XIV had taken it upon himself to relocate the French monarchy 12 miles (19 km) from the squalor of Paris.

If Louis XIV's reign had been distinguished by extravagance, Louis XV's was characterized by carelessness. Louis XV was a perfect example of the Old Regime's dysfunction. He preferred to satisfy his mistresses (notably Madame de Pompadour and Madame du Barry) rather than his kingdom. But he did pull himself away from the boudoir long enough to get France into some serious financial scrapes. Under his reign, France was involved in the War of Polish Succession (1733-38), the War of Austrian Succession (1740-48) and the Seven Years' War (1756-63). France lost valuable land during these battles, and the Seven Years' War nearly drained the treasury.

At Versailles, it was easy to forget about the French people -- and also pretty convenient for a despised king like Louis XV. The people couldn't be ignored, though. For many years, diseases like the plague had kept the peasant population in check. Now, the population was booming and clamored for sustenance.

When Louis XV died in 1774, the crown went to Louis Auguste, who famously intoned, "Protect us, Lord, for we are too young to reign." No one had much confidence in Louis XVI's ability to lead France, much less pull it out of debt. His young wife, Marie Antoinette, only compounded his troubles. Marie Antoinette had been married off to Louis to cement the relationship between the Austrian Hapsburgs and the French Bourbons. They were teenagers when they wed, but already shy Louis and tentative Marie Antoinette were under pressure to create the next heir to the throne. The couple floundered in the bedroom for nearly seven years before producing a child -- and their first was a girl.

Young Marie Antoinette, blissfully oblivious to the fate that awaits her
Imagno/Getty Images

When she wasn't reproducing, Marie Antoinette was spending. Her reputation as Madame Deficit was well-deserved: She amused herself by ordering hundreds of gowns, trying out elaborate hairstyles and hosting lavish parties at her private retreat, Petit Trianon, on Versailles' expansive grounds. Marie Antoinette had a yearly wardrobe allowance of $3.6 million, but she easily surpassed that by ordering dresses trimmed with silver and gold and dripping with precious jewels -- even diamonds. Her focus was on pleasing the courtiers and her new family, and she may very well have been ignorant of the conditions in Paris. After a brief excursion to the city in 1773, she wrote to her mother, "What was really affecting was the tenderness and earnestness of the poor people, who, in spite of the taxes with which they are overwhelmed, were transported with joy at seeing us" [source: Modern History Sourcebook].

Emasculated by this negative publicity and still smarting from criticisms at court, Louis exacted military vengeance. He pledged 2,000 million lives to the American Revolutionary War; for that massive sum, he could've fed and sheltered 7 million of his own people for a year. This mistake wouldn't be his last, however. And the French would see to it that he was duly punished.