There Will Be (More) Blood: French Revolution Violence 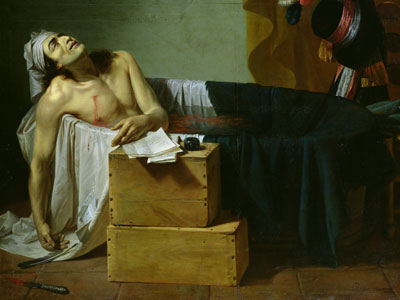 An artist's depiction of Marat's murder. Marat would become a martyr for the French Revolution.
Joseph Roques/Getty Images

One of the most fascinating and haunting aspects of the French Revolution is that no one was spared from its gory violence. There was no effort to shield women and children's eyes from the heads that lolled at the base of the guillotine. Dainty aristocrats became hardened from years languishing in dank prisons. A man who'd been your political ally and friend on Tuesday could very well turn you in for counter-revolutionary plotting on Wednesday. In Paris, the steady thud of the guillotine's blade meeting flesh and bone became white noise to city inhabitants. People generally accepted that they were beholden to the greater cause of the revolution, and that common goal made the conditions more tolerable.

While city-dwellers may very well have been desensitized to the violence of the revolution, the provincial people of France were deeply disturbed by it. In the provinces, counter-revolutionary uprisings were more frequent, but the Republic put them down by mass executions. People were bound together and made to face firing squads, and their bodies were weighted and tossed off boats in open water. Moderate members of the National Convention began to suspect that civil war may very well break out in France before the revolutionary wars with Austria and Prussia could be won.

An unsuspecting figure from the provinces arrived in Paris in mid-July, 1793: Charlotte Corday. She tried twice to arrange a meeting with Jean Paul Marat, under the premise that she had information about counter-revolutionary activity in the province of Caen. Corday was convinced that Marat was the chief agitator of the revolution, and she thought that if he were dead, peace would be restored in France. He refused to see her, and she finally forced her way into his apartment, where he lay soaking in a medicinal bath. With a modest dinner knife, she stabbed Marat in the chest, instantly killing him. She was seized, put on trial and guillotined. Had Charlotte Corday lived to see the fallout from Marat's death, she'd doubtlessly have been heartbroken. She couldn't have foreseen it, but the man who was a riotous journalist in his life became a martyr in his death.

Marie Antoinette's last inscription in her prayer book, which reads, "My God, have pity on me! My eyes have no more tears to cry for you my poor children; adieu! adieu!"
James L. Stanfield/National Geographic/Getty Images

Months later, another major figure of the Revolution was put to death: Marie Antoinette. She'd been put to trial under charges of treason and other counter-revolutionary activity. One of the most shocking charges was molestation of her son. While Marie Antoinette had borne the weight of the other indictments, she couldn't bear this one. It was false, she decried, and she begged all other mothers present to reconsider the implication of such a statement. For a moment, the former queen had her sympathizers, but the people's bitter hate outweighed the poignancy of her plea. On Oct. 16, 1793, a cart delivered her to the guillotine. Marie Antoinette was the last queen of France, and she had left a legacy of wasteful extravagance in the midst of starvation.

The machinery of the revolution growled for more victims to feed the cause. Who would be sacrificed next?