The Directory and the War Hero 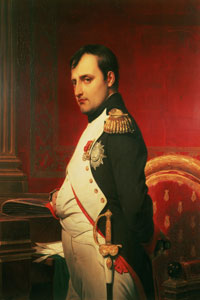 The Directory wasn't a real republic. Where, the people wondered, were the liberty, equality and brotherhood of the early reformation? For one, the members of the Directory weren't elected into position -- they were appointed by members within the organization. The people weren't getting a say, and they wouldn't until the first round of open elections. When those came around, it became apparent that the Directory was inching back toward France's monarchical past. Only about 30,000 wealthy French men were eligible to vote.

There were complications with the new constitution, too. The Directory was walking a fine line, politically speaking, and it wanted to cater toward the growing number of royalists in France as well as the remaining Jacobins and sans-culottes who favored the Republic. The new constitution caused riots in the streets of Paris on Oct. 5, 1795, and the military was called in to quell the uprising. One notable militiaman present at the scene was the French Revolutionary War hero Napoleon Bonaparte. (His military valor would become a major factor as France struggled to regain political identity, as we'll see soon.)

As conditions worsened in Paris, fingers pointed at the flippant Directory. It was trying so hard not to offend the opposing royalists and Republicans that it had neglected the people of France -- the very group for whom the constitution had originally been written. In 1795, one Parisian wrote, "Great God, what a Republic. And the worst of it is, one can't tell when or how it will end. Everybody is dying of hunger". Popular opinion of the Republic continued to dwindle, and as the aristocratic emigres who'd left France to escape death returned home, it looked as though France was ready to re-embrace a monarchy. Newspapers and pamphlets that had once decried the king and queen now blasted the Directory. The Republic had failed.

On the borders, however, there was much to celebrate. France was at last wrangling victories out of the far-flung and poorly planned Revolutionary Wars. In Italy, Napoleon Bonaparte's victories had been the talk of Europe -- and he'd even managed to establish a peace treaty with Austria. When the war hero returned home, a swift and decisive coup turned power from the Directory to him. Napoleon installed himself as the new leader of France, a fresh alternative for the people who thought that only a return to monarchical society would bring them "security". He even reinstituted the Church in France, which had been dechristianized under the revolution.

But there would be no happily-ever-after for France quite yet. In its fall from monarchy to police state, there was another bottom rung to hit: complete dictatorship.