The National Convention: The Moderates, the Radicals and Those Who Refuse to Wear Breeches 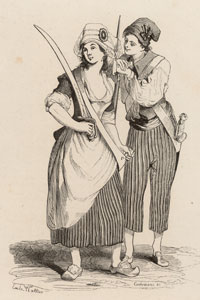 The National Assembly was born out of shared interest in liberty, equality and brotherhood, but as the French Revolution wore on, differences in political ideologies became more obvious. Essentially, the assembly -- known from Sept. 20, 1792, on as the National Convention -- split into two major factions: the moderate Girondins and the radical Jacobins (the most prominent of whom was Robespierre). On the city streets of Paris, another political faction was gaining steam. The sans-culottes, or "those without breeches," became the leaders of local government while the convention governed the entire nation of France. These localized rebels were typically artisans who identified themselves by wearing full-length pants rather than the knee-length breeches that the style of the Old Regime had dictated.

To cut ties completely with the Old Regime, the Convention even created a new Republican calendar for France. All references to religion found in the old calendar's name were stricken, and the advent of a 10-day week was intended to make French citoyens (citizens) forget about Sunday, the proverbial day of worship and rest.

One of the first major issues to divide the Convention was the trial of Louis XVI, now known by the egalitarian surname Capet. Louis Capet had no allies in the Convention, but the Girondins at least wanted to spare his life. The Jacobins wouldn't hear of it; Louis must die. Robespierre convinced the people that the monarch must die for the republic to live. Louis ominously prophesied, "I trust that my death will be for the happiness of my people, but I grieve for France…" On Jan. 20, 1793, he was guillotined.

Louis Capet appears before the National Convention to await his verdict. It would be a glum one: He was sentenced to be guillotined.
Hulton Archive/Getty Images

Louis' death didn't put to rest any controversies within the Convention, though. The poorly waged French Revolutionary Wars against Austria and Prussia only divided the factions further. While the wars began in an effort to protect France's borders from other European monarchies who would seek to restore Louis to the throne, they'd become an ideological mission of spreading revolutionary fervor through Europe.

The Jacobins were split on the matter of war. Georges Danton and Robespierre, once political allies, refused to see eye to eye. Danton was a rotund, convivial man with jarring opinions and a loud voice. His priority was the battlefield while Robespierre concerned himself with more immediate threats in the city of Paris. The threat of foreign troops encroaching on French soil finally convinced the Convention to send revolutionary militia to the outskirts of France, and the city of Paris thereby became devoid of protection.

Marat stepped in again to rally the people to action. This time, the Jacobin journalist's directive was straightforward: Kill all the political prisoners. He feared that with the population of Paris outnumbered by the imprisoned counter-revolutionaries, the revolution would be squelched. The sans-culottes rose to the occasion and wiped out thousands of prisoners -- men and women, aristocrats and clergy -- in just a few days. The bloodbath became known as the September Massacre.

The massacre brought Europe's critical gaze zeroing in on France. Was this still a revolution for democracy, or was it just gratuitous bloodshed? The French reconsidered their stance, too. In the outlying provinces, the rural French people were outraged by urban violence. Robespierre decided that someone would have to govern the frenzied French. And for a time, Robespierre, known by his contemporaries as the "Incorruptible," was a steady and righteous leader. But even he lost his cool in the subsequent years.