The Reign of Terror 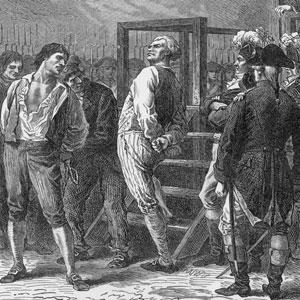 On his way to the guillotine, Danton supposedly said, "My only regret is that I am going before that rat Robespierre."
Hulton Archive/Getty Images

With the moderates out of the picture, the Jacobin leaders persuaded the Convention members to endorse the Great Terror, an initiative designed to purge France of all counter-revolutionaries. France essentially became a police state, and Robespierre, who had disdained measures of violence and fought so hard for the implementation of the Republican constitution, condoned the execution of counter-revolutionaries. He also agreed to reverse -- temporarily, at least -- the rights guaranteed by the constitution as well as censor the press. While he'd encouraged sensational press under journalists like Marat and Hebert, Robespierre didn't want the kind of chaos that their fiery rhetoric inspired. He wanted to keep the city tightly controlled and bound to his directives.

Two important organizations grew out of the Great Terror. The revolutionary tribunal was designed to try citizens who were suspected of counter-revolutionary activity. These offenses ran the gamut from idle gossip about the Convention to downright denouncement of the Convention -- or even as innocuous a charge as mistakenly addressing someone as monsieur or madame instead of citoyen. Any deed or word that went against the Republic was considered an act of treason. And with the looming threat of France's aristocratic emigres returning to the country to re-establish the monarchy, the Convention kept a close watch on citizens.

The other organization, the Committee of Public Safety, was an abbreviated assembly that governed France in its police state. Robespierre sat at the head of this committee and watched approvingly as the guillotine fell several times a day. Under this tightly controlled government, France at last gained traction in the wars along its borders, and the impromptu violence that reigned in the streets was restrained by Robespierre's iron hand. There were no more chaotic massacres; Robespierre decided who lived and who died. He reasoned, "Terror is nothing other than justice, prompt, severe, inflexible; it is therefore an emanation of virtue" [source: Modern History Sourcebook].

As Robespierre's influence grew, Danton became rather uneasy. If the revolution continued along the path of death and destruction, its leaders would be next. But when Danton spoke about the necessity of ending the revolution, he was sent to the tribunal for his counter-revolutionary rhetoric. He and his allies, the Dantonists, were guillotined. Danton prophesied that Robespierre would soon follow, and he was right -- but before he died, Robespierre unraveled a little more.