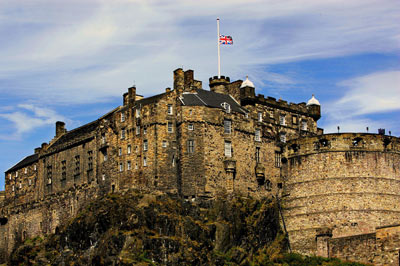 Edinburgh Castle in Scotland was built high on bedrock, so it didn't need a moat.
Nicolas Asfouri/AFP/Getty Images

Remember that castles served primarily as housing for military forces -- they evolved into residences for nobles. So, they were designed for defense. Medieval castle builders incorporated designs of early castles and improved upon them over time. Castle designs also changed to keep up with improvements in siege technology. Castles also had to provide necessities for living (like sanitation, fresh water and cooking areas), which were especially important when the castle was under siege.

With this in mind, let's look at the major features of a castle.

The moat -- a large ditch or trench surrounding the outer castle wall -- was a castle's first line of defense. The moat could be filled with water or dry (a dry moat could have been lined with wooden spikes). It usually had a drawbridge across it that was drawn up when the castle was under attack. Many moats were also dump sites for garbage and sewage.

The existence of a moat was dictated by the terrain -- not all castles had moats. Some castles were built high up on bedrock and didn't need them. Edinburgh and Stirling castles in Scotland, for example, stand on high rock outcroppings. Many German castles along the Rhine River were built on the mountainsides of the river valley.

The outer curtain wall was high, thick and made of stone or brick. Walls could range from 6 to 10 meters high and 1.5 to 8 meters thick. In many castles, wall thickness varied according to the area's perceived vulnerability.

Curtain walls were actually two walls. Masons cut and fitted the stones or bricks of each wall and cemented them together with a limestone mortar. The builders filled the spaces between the walls with stone fragments, small rocks and mortar fragments (rubble). As the wall grew higher, the builders placed wooden scaffolds or work platforms into it so they could work and bring materials up using man- or animal-powered cranes or ramps. When that particular section of the wall was finished, they tore down the scaffolding, but a square hole remained where the scaffold's support beams had been.

Some castles had a substantially higher outer wall called a shield wall. The shield wall was often placed on the side of a castle that might be especially vulnerable to siege weapons like catapults, trebuchets and siege towers (more on this later). The shield wall could also prevent objects from going over the walls into the bailey.

On the next page, we'll finish up with the outer defenses and move on to the castle's inner defenses.