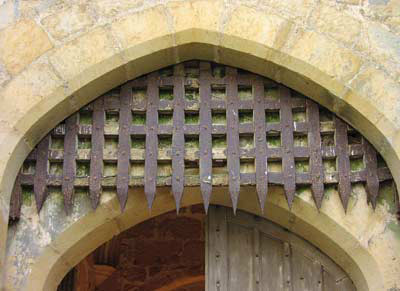 The portcullis on Bodiam Castle in England
Photo courtesy free-images.org.uk

These tall, round or square structures were built into the length or corners of the castle walls. They were usually higher than the walls and constructed in the same manner. Rounded towers projecting out from the wall or at a corner gave a better view to the defenders. The walls usually had arrow loops, and the tops could have hoardings or be crenellated or roofed.

Inside the towers, stairs were often circular (turning clockwise while going up), narrow and made of wood or stone. This clockwise turn gave the defender an advantage because soldiers were right-handed (left-handed people were considered evil, so even if you were left-handed, you learned to fight with your right). Going up the stairs, defenders had room to swing their weapon hands, but descending attackers could not do this easily.

Gatehouses were inside the wall and connected with the bridge over the moat, but they were more than just doorways. The gates were usually long tunnels with arrow-looped towers at either side of the entrance. The outer opening of the gatehouse tunnel was covered by a grated wooden or iron gate called a portcullis. Soldiers could raise the portcullis with a winch and lower it while under attack so defenders could shoot arrows through the openings.

In the ceiling of the gatehouse tunnel, there were openings called murder holes through which defenders could drop objects and hot liquid. The sides of the tunnel also had arrow loops. Finally, the gatehouse had a heavy wooden door at the inner opening, which soldiers could shut and lock with braces.

The bridge's retraction mechanism was usually located inside the gatehouse. Some drawbridges were raised and lowered with a winch, and some had a center fulcrum that allowed them to pivot perpendicularly to form a wall. Other drawbridges could spin out so that they were parallel to the moat and did not connect to either side.

Some bridges had an additional fortified structure in front or alongside them called a barbican. The barbican was built of stone and had towers with arrow loops and battlements.

The inner walls and towers were constructed much like the outer version. They had many of the same features (arrow loops, hoardings, crenellations) and served the same purpose. The inner walls also divided the bailey or ward into different sections. In some castles, the inner towers were freestanding structures.

A knight readies for a joust at the Tower of London.
Peter McDiarmid/Getty Images

The bailey also served as a marketplace for festivals and fairs, a practice field for drilling soldiers and training horses, and an area for tournaments. In the tournaments, knights fought with swords and shields on foot and jousted in arenas called lists (or list fields). In the later Middle Ages, baileys featured gardens and fountains.

Some castles didn't have inner walls, so the bailey also contained the towers, the keep (main residence) and auxiliary buildings (great hall, chapel, knight and servant quarters, kitchens and workshops).