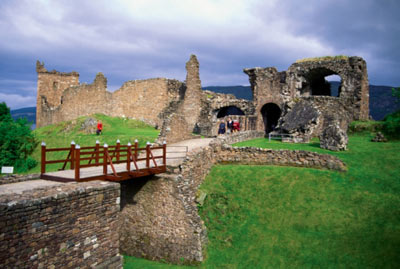 The ruins of Urquhart Casle in Scotland
Medioimages/Photodisc/Getty Images

Castles evolved from ancient walled cities like Troy, Babylon, Jericho and Mycenae. These cities had thick, high stone walls with gates that limited traffic flow. Soldiers would stand guard at the gates and on the walls to fend off attackers.

The earliest type of castle was essentially a ringed fort called a grod. A grod consisted of wooden and earthen walls (ramparts), a fortified gate or gates and a surrounding moat.

A second type of early castle stemmed from the high, round watchtowers that the Romans built along their frontiers. The tower, called a bergfried, was made of wood (and stone, starting in the 13th century). Bergfrieds, found throughout Germany, were the predecessors of the tall towers in later medieval castles.

The third type was motte and bailey castles. They consisted of a mound (motte), which was located within an open courtyard (bailey) that was enclosed by wooden wall with a fortified gate. On top of the motte was a wooden tower called a donjon. The motte and bailey castle incorporated features of the grod and the bergfried. They became popular during the reign of Charlemagne in France (A.D. 800) and were used widely by William the Conqueror after the Norman conquest of England in 1066. The motte and bailey could be constructed in a matter of weeks or months.

These early castles laid the foundations for developments of castles in the High Middle Ages.

We'll learn more about these features on the next page.

Castles and palaces were stately homes for nobles and kings, but only castles had high curtain walls, towers and moats. Although palaces are large residences and may have walls around them, they do not have high curtain walls and were not designed for military purposes.