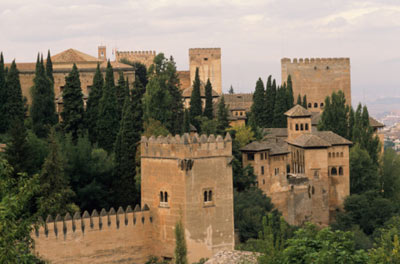 What happens when an invading army entered a territory and laid siege to its castle? Let's look at siege methods and how the castle's defenders could counter it.

The invading army surrounded the castle and cut off its supplies of food and water with the hope of starving the defenders. In an effort to spread disease among the defenders, the invaders could use their catapults to send dead or diseased animal and human bodies over the castle walls. They could also loft fiery projectiles to wreak havoc inside the castle. This siege method was actually preferred because the invading army might negotiate the castle's surrender with minimal casualties. But it took months to years to work, and the invading army had to be very well supplied with food and water for the duration of the siege.

If they had time to prepare, the defenders could outlast the siege. They usually brought supplies and people from the surrounding countryside into the castle. Most castles had their own water supplies for this situation. Also, the defenders would usually burn the surrounding countryside so the invading army could not forage it for supplies. Often, the outcome of the siege depended upon whether the invading army or the defending army received reinforcements first.

The invaders would set huge scaling ladders against the castle's outer curtain wall. Invading soldiers would climb the ladders to gain access to the castle. However, the climbers were vulnerable to arrow fire and objects thrown at them from the battlements on the castle walls. Defenders could also push the ladders off the walls.

Alternatively, the invaders built large wooden siege towers and filled them with soldiers. Other soldiers would wheel the towers to the base of the curtain wall. Soldiers in the top of the tower would lower a plank, storm across it onto the battlements and hope to outnumber the defenders. Siege towers provided cover for the invading soldiers, but they were large and heavy. The invaders were vulnerable as they stormed across the plank single-file. Also, the defenders could set the wooden towers ablaze with flaming arrows.

If an invading army could break down the castle gate, they could enter the castle relatively easily.So they'd use battering rams (large wooden logs) to pound against the gate (or sometimes the castle walls) and eventually break it. Some battering rams were covered to shield the invading soldiers from the defenders' arrow fire and thrown objects. Sometimes, the wooden castle gates were set on fire to weaken them.

To defend against battering rams, defenders would fire arrows (sometimes flaming). They would often lower soft, padded curtains or wooden walls to lessen the impact of the battering rams. Finally, they could brace the castle doors or gates to withstand the forces of the blows.

And as we mentioned, castle gates had murder holes and arrow loops to help pick off invaders who breached the gate.

Bring down the walls

If an invading army could create a breach in a wall, they could enter the castle in a less defended place. Invaders smashed the walls with battering rams and launched heavy stone projectiles and flaming projectiles at and over the walls. They used catapults, trebuchets (heavy sling weapons) and ballistae (large mounted crossbows).

Another way to bring down castle walls was to mine under them. The invading army would dig tunnels under the castle walls and brace them with timber supports. Once they dug the tunnel far enough to the other side, they would set the tunnel on fire. The timber supports would be destroyed, and the wall above the tunnel would collapse. But defenders could counter by digging under the invading army's tunnel before it reached the wall.

Sieges usually combined all of these tactics. They were expensive, exhausting and time-consuming, but were often necessary to take control of a castle and its territory.

The 2005 movie "Kingdom of Heaven" accurately depicts siege techniques during the segment on the siege of Jerusalem during the crusades.