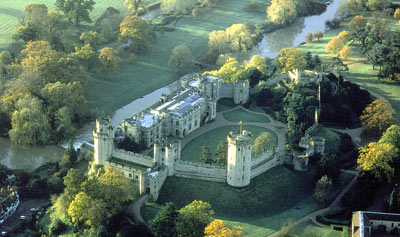 Castle construction was an expensive undertaking; King Edward I nearly bankrupted the royal treasuries by spending about 100,000 pounds on his castles in Wales. Castle building employed about 3,000 workers (like carpenters, masons, diggers, quarrymen and blacksmiths) under the direction of a master builder (Master James of St. George built the Welsh castles of King Edward I). Castles generally took two to 10 years to build.

To learn and understand medieval castle building techniques, let's look at a modern castle building project. As an experiment in archaeology, Michel Guyot and Maryline Martin have assembled a team of 50 workers (architects, archaeologists and skilled workers) to build a medieval castle from scratch by using techniques and materials of the Middle Ages. The project, in Treigny in the Burgundy region of France, is called Project Gueledon. The design is based on 13th-century castle architecture -- it consists of a dry moat, curtain walls, corner towers and a large tower keep. Construction started in 1997 and is expected to last about 25 years. After the initial investment, the cost of the project has been covered by tourism. In 2006, the site hosted more than 245,000 visitors, and the project brought in about $2.6 million.

The building materials are stone, clay soil and oak trees that are found near the site. The workers use traditional techniques from the 13th century. To split stones for the walls, quarrymen "read" the rock face to see the lines where it will fracture. They then drive a line of holes into the stone and then pound corners into the holes, which makes shock waves go through the stone and break it.

Workers use horse-drawn wagons to haul the stones from the quarry to the building site. Stone masons then chisel the raw stone into blocks. Workers use man-powered cranes to lift the finished stones to the scaffolding on the castle wall.

Other workers make mortar on the site from lime, soil and water. The masons on the wall fit the stones together and use the mortar to hold the blocks together.

Workers use traditional tools to measure and lay out castle pieces. For example, craftsmen use a long rope with knots placed every meter to measure wood beams and layout pieces. They also use wooden right angles and calipers for measurements. They use a wooden triangle with a line and plumb bob suspended from one angle as a level when placing stones.

As the castle wall gets higher, new scaffolding must be placed in the wall and the old ones removed, leaving square holes in the walls. As of 2007, Castle Guedelon is about a third complete.

Once a castle was completed, it was ready for defense. Let's look at medieval siege techniques and the strategies used by both sides.