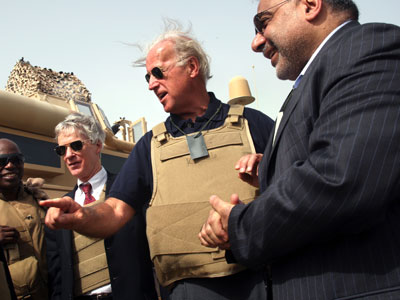 Sen. Biden during a 2007 visit to Iraq.
John Moore/Getty Images

At the heart of Joe Biden's foreign policy beliefs is that the Iraq War was possibly "the biggest foreign policy blunder in America's history" [source: Biden]. Sen. Biden took criticism for this stance on the war, especially since he initially voted in favor of sending U.S. troops into Iraq in 2002. He later changed his opinion, and in February 2007, he proposed that Congress repeal its authorization of the use of force in the Middle Eastern nation, which would have effectively ended the war [source: Salon].

This repeal didn't pass, but a later proposal to end the Iraq War did. In September 2007, the Biden Plan, a nonbinding resolution which proposed dividing Iraq into three autonomous nations (split among the three predominant ethnic groups in the region), passed in the Senate by a vote of 75 to 23 [source: MSNBC]. Sen. Biden has a personal interest in seeing the war end: His oldest son, Beau, is a captain in the Delaware National Guard and was scheduled to be deployed for a tour in Iraq in October 2008 [source: Washington Post].

Despite the pro-life stance typically demanded by his Catholic faith, Sen. Biden is a staunch supporter of choice in the matter of abortion, though he "is prepared to accept … on faith" that life begins at conception [source: NBC]. He opposes partial-birth and late-term abortions, and is opposed to public funding of any abortions [source: NBC]. He has voted in favor of federal funding for sex education and access to contraceptives, as well as expanding stem cell research [source: U.S. Senate]. Biden is against same-sex marriages (though he favors civil unions), but doesn't support a Constitutional amendment banning them [source: New York Times].

On crime, Biden favors a large law enforcement presence. In 1994, the Biden Crime Bill introduced an additional 100,000 police officers nationwide through federal funding. The bill also banned some assault weapons, increased the scope of offenses punishable by death, increased funding for new prison construction and increased civil liability for gender-related abuse through the Violence Against Women Act in the bill [source: Weekly Standard].

Biden said in 2007 that if he were invested with special powers from God, he would use his one wish to solve the global energy crisis [source: WSJ]. He is a strong supporter of biofuel research and set a goal for 60 billion gallons of biofuels to be produced in the United States annually by 2030 [source: Grist]. He is against drilling in the Arctic National Wildlife Refuge and offshore drilling along U.S. coastal waters [source: New York Times]. He also called for removing government subsidies of oil companies and for investigating Pres. George W. Bush and others for price gouging consumers on gasoline [source: Biden]. Despite receiving high scores from environmental groups for his voting, Biden was criticized in the press for being among the candidates using personal jets on the campaign trail [source: AP].

Biden is in favor of repealing the Bush tax cuts for the wealthiest one percent of Americans. He said in 2008 that it's time for the wealthiest Americans to "be patriotic" by paying higher taxes [source: AP]. Biden supports Barack Obama's tax plan to cut taxes for Americans earning less than $250,000 per year and raising taxes for those who make more than that amount. In the Senate, Biden's voted against repealing or lowering the Alternative Minimum Tax [source: U.S. Senate]. This tax, passed in 1969, was meant to tax high incomes, but was never adjusted to reflect inflation and increases in average salaries. The tax now levies stiff fees against middle-income families, rather than high income families.

Read about Biden following his nomination for vice president on the next page.