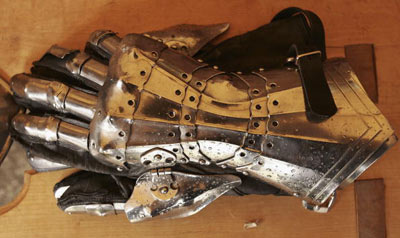 Armored gloves rest on a bench before the start of a jousting tournament re-enactment.
Peter Macdiarmid/Getty Images

The boys who trained to be knights were generally the sons of knights or lords. (In some cases, the sons of commoners could train for knighthood -- as in the movie "A Knight's Tale.") These children were cared for by the women of the castle until they turned 7, when they were placed in the house of another lord or knight. There, they were bestowed with the title of page. Huntsmen and falconers taught them how to hunt, and priests or chaplains taught them religion, reading and writing. Pages learned to fight by imitating knights and practiced combat with each other using wooden swords and lances.

When a page turned 14, he could become an esquire (or, more simply, squire). In a religious ceremony, the new squire took a consecrated sword from a bishop or priest and swore to use it for religious and honorable purposes. After this ceremony, the squire took his place in his lord's household and attended to his duties. There were different squires for specific duties.

During this period of squiring, the would-be knight learned to serve and mastered the intricacies of social behavior and chivalry.

Besides carrying out their duties in the lord's household, squires learned the martial arts of being a knight. They learned how to handle horses and continued practicing with wooden swords and lances -- sometimes with the knights themselves. They wore chain-mail armor to get used to its weight (and sometimes even danced in hauberks, or chain-mail shirts). As they got older, they exercised and trained in full armor. Squires would also assist the knights in combat, at tournaments and in travel to foreign lands (carrying and cleaning armor, taking care of the knight's horses, packing baggage).

Upon turning 21, a squire was ready to be knighted.­­

In the Middle Ages, women didn't usually have the opportunity to become knights. However, there were a few exceptions: