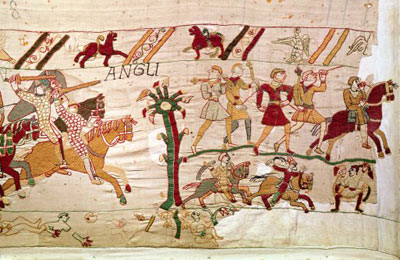 Detail from the Bayeux Tapestry, circa 1082
The French School/The Bridgeman Art Library/Getty Images

After the fall of the Roman Empire, Western Europe had no countries. Numerous tribes fought for domination over territories, but there were no central governments or national armies. The Frankish tribes established control over vast territories, and one Frankish king, Charlemagne (Charles the Great) ruled a large chunk of Europe -- from northern Spain and Italy through France, Germany and Poland. To control such a large territory, Charlemagne instituted a feudal system of government. In feudalism, the king owned all of the land.

The king granted fiefs (portions of land) to nobles (lords or barons) in return for loyalty, protection and service. The king could also grant fiefs to vassals (knights) in exchange for military service. Many knights were professional warriors who served in the lord's army. In return, the lord provided the knight with lodging, food, armor, weapons, horses and money. Peasants, or serfs, farmed the land and provided the vassal or lord with wealth in the form of food and products. The peasants were bound to the land, so it was in the vassal's interest to protect them from invaders. Fiefs -- and the obligation to serve the king -- were inherited by the eldest son of the ruling nobleman.

Feudalism allowed large territories to be governed in the absence of a central government. Each lord or vassal raised an army to defend his fief and to serve the king as needed. One drawback to ­this system was that the­ nobles were very powerful because they controlled the armies. In fact, nobles often warred amongst themselves over territories.­

Feudalism did offer a means for a person to advance himself within society through military service and knighthood. Knights were members of the gentry in that they held a place in society above the peasants, but they weren't necessarily members of the noble ruling classes or royalty. Knighthood was not an inherited position -- it had to be earned. So, it was an appealing means for a younger son of a lord to advance himself. A knight could make a fortune either by a grant of land from a king or by being a paid professional in service to a lord.

The path to knighthood started when a boy was very young -- official training usually began around age 7 . In the next section, we'll learn about how boys became knights.­

Don't Be So Cavalier

The term "cavalier" was coined during the English Civil War in the mid-1600s. It was used by the Parliamentarians as an insult to the Royalists (high-born knights and supporters of King Charles). The word was derived from "chevalier," the French word for knight, and described the Royalists as overbearing or swaggering. The dress of cavaliers was much fancier than the plain, almost Puritan, clothing of the Parliamentarians (referred to as "roundheads"). During the war, the medieval knight had all but faded because firearms and gunpowder were in heavy use.