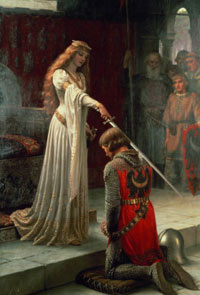 Squires were usually invested as knights during one of the great feasts or holidays, like Christmas or Easter. Sometimes the ceremony took place on another special occasion, such as the wedding of a noble or royal. The king, nobles, knights and clergy or the squire's father (if he were a knight) could confer knighthood.

The knighting ceremony usually involved a ritual bath on the eve of the ceremony (the would-be knight usually dressed in white). Then an all-night prayer vigil would begin, sometimes with the squire's arms on the altar. The kneeling squire would swear an oath, which included some of the following points:

Then the master of the ceremony would dub the new knight on the shoulders with a sword. The knight would then dress in armor, receive his sword, mount his horse and participate in some martial games to demonstrate his skills as part of the celebration.

In times of war, a squire who had demonstrated exceptional bravery in battle could be knighted on the battlefield by another knight.

With knighthood came several privileges. Knights obtained the title "sir." They could own land, hire soldiers to defend it and dispense justice over the soldiers and those living on the land. They -- and their horses -- could wear armor in battle (armor was expensive, so only knights could afford it). During feasts, banquets and dinners, knights had places at the high table, where lords and royals ate. They could also bear arms inside a church because they were defenders of God and the church.

In times of war, knights were called to arms by their lords or by the king. They led foot soldiers and archers into battle, much like modern officers do with enlisted men. During peacetime, knights managed their estates, dispensed justice, trained for battle and participated in tournaments. We'll learn about tournaments on the next page.­

Chivalry was a code of conduct to which all knights adhered. A knight swore to defend the weak and to uphold virtues like compassion, loyalty, generosity and truthfulness. The code of chivalry prevented well-armed and well-trained knights from wreaking havoc on the general population.