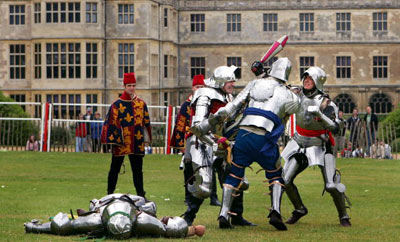 Knights club each other in the last-man-standing foot combat challenge (melee) during a tournament in England in 2005.
Daniel Berehulak/Getty Images

In peacetime, knights often demonstrated their martial skills in tournaments, which usually took place on the grounds of a castle. Medieval tournaments were a major spectator sport -- much like large sporting events today. In early tournaments, many knights fought in an apparent free-for-all called a melee. The melee looked very much like a real battle. The knights assembled in a large group, and a judge or marshal would signal for the fight to begin. Each knight would fight another, the victor would move on to another opponent, and the last knight standing was the winner. The church disliked melees, and even tournaments, because many knights were injured or killed.

The most popular, and romanticized, competition in tournaments was the joust. In an area of the grounds called the lists, two knights on horseback would charge each other. Each knight held a wooden lance with a blunted tip. Each would try to break his lance on the body or head of his opponent or try to knock his opponent off his horse. They received points for breaking a lance (the number of points depended upon what part of the opponent's body was struck), and there were usually anywhere from one to three charges in a round.

Even though the weapons were blunted, many knights were injured or killed in jousts. King Henry II of France was killed in a joust in 1559 when a broken lance penetrated the visor of his helmet.

The winner of the joust moved on in the competition and could challenge other knights. The loser had to turn his armor and horse over to the victor. Usually, the victor would then sell the armor and horse back to the loser. In this way, knights could amass a fortune (or lose one) in tournaments. One knight, Ulrich Von Lichtenstein, made a great career from tournaments throughout Europe and wrote about his adventures. (You may recall that Heath Ledger's character impersonated Sir Ulrich in the movie "A Knight's Tale").