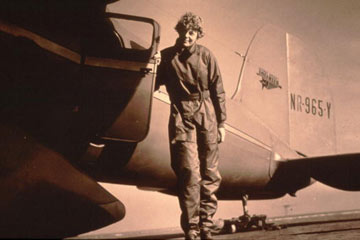 In the face of a mystery or lack of evidence, the imagination tends to fill in the gaps itself. We seem to have an innate need for finality, for a full, clear picture -- a need that finds us preferring wild conjecture to the questions in our heads. Such is the case with the disappearance of early aviatrix Amelia Earhart and her navigator Fred Noonan. It's not enough to suppose that somewhere in the southwestern Pacific Ocean lies a Lockheed Electra two-seat airplane that may only be found by sheer chance, if at all.

This leaves too much room for doubt, and a mystery has developed in the 70 years since she vanished. To some, the 39-year-old Amelia Earhart was an American spy sent to carry out espionage against the Japanese, who caught and executed her. (Even though, the Japanese aided the search effort in the days following the disappearance.) To others, she survived the mission and was forced to become Tokyo Rose, the infamous wartime radio personality. Perhaps the most bizarre theory out there is that she secretly returned to the U.S. and assumed the identity of Irene Craigmile Bolam, a wealthy New Jersey banker and housewife. This is, of course, not to mention the hypothesis that she was abducted by aliens [source: Heller].

Even those who take more scientific approaches to the Earhart disappearance tend to maintain a certain fervent dedication to uncovering her final whereabouts. Various private expeditions -- with multimillion-dollar price tags -- have been carried out in the decades since the U.S. Navy called off its search in the weeks after she vanished in July 1937. Despite the use of increasingly sophisticated sonar to scour the ocean bottom and modern archaeological techniques to comb tiny islands, the fate of Earhart and Noonan remains undetermined.

This isn't to say that no evidence has been uncovered. Nor that searchers are likely to give up their pursuit of the truth about the Earhart mystery. 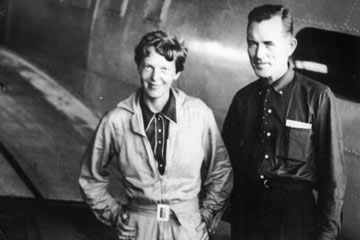 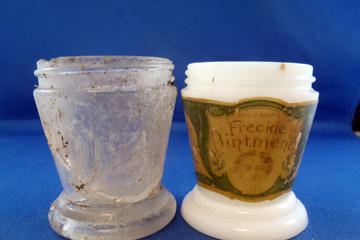 With so many pieces of evidence -- including human remains -- why does the mystery of Amelia Earhart remain unsolved?

Perhaps the biggest obstacle to discovery is the vast geographic area in which Earhart's plane might conceivably be found. No one can be certain exactly where Earhart's plane went down because of the loss of radio contact during the flight and the limiting effect of overcast skies on celestial navigation. Combing a quarter of a million square miles of ocean immediately following the disappearance yielded exactly nothing for the Navy. While subsequent efforts have focused on smaller areas, the searchable canvass remains massive, often on the order of 1,000 square miles (2,590 square kilometers).

The area's marine topography makes what's already a needle in a haystack job even more difficult: Pacific atolls rise up suddenly from the depths and are surrounded by steep shelves that lead to the ocean floor. Meanwhile, human error has also helped thwart the search for definitive proof. The human remains found on Gardner Island were lost after being examined by a doctor in the early 1940s. That rules out the definitive DNA matching technology that would likely determine conclusively whether the bones are Earhart's. (Forensic anthropologists looked at the doctor's notes in the 1990s and determined that the bones probably belonged to a woman of European descent) [source: Thurman].

These obstacles haven't deterred Earhart fans and aviation geeks from continuing their quest for answers. TIGHAR is set to launch a 30-day expedition in mid-September 2014 exploring the waters around Nikumaroro Island in an oceanographic research ship. Searchers plan to deploy two human-operated submersibles from the ship to capture detailed photo and video images of a 1-mile (1.6 kilometer) search area. At the same time, another team will comb the island's beachfront and forest in search of remnants from what might have been Earhart and Noonan's campsite [sources: Bennett-Smith, TIGHAR].

Searchers have continued to find significant clues. In 2013, TIGHAR announced that it had used sonar imaging to uncover evidence of a 22-foot (7-meter) object that may be a piece of Earhart's aircraft. Resting 600 feet (183 meters) below the surface of the Pacific Ocean and west of Nikumaroro, the image resembles the fuselage of Earhart's Lockheed Electra [source: Bennett-Smith].

There's good reason to believe that all or most of the plane remains intact. An hour before their last transmission, Earhart told the Coast Guard she and Noonan were flying at a low altitude, around 1,000 feet (304 meters). At around 100 miles per hour (161 kph), the Lockheed Electra could conceivably have maintained its integrity. If it did, the plane may still be in perfect shape, preserved in the oxygen-deprived depths of the South Pacific. Perhaps sooner rather than later we'll get to the bottom of the mystery surrounding Earhart's disappearance.

Based on the evidence so far, Tom King, senior archaeologist for TIGHAR believes that Earhart and Noonan could not find Howland so they flew until they found Gardner Island and landed safely on the edge of a reef. At that point, the tide was very low. They camped nearby, visited the plane and sent out radio signals. As the tides got higher over several days, the plane floated out and eventually sank. Navy pilots did not see the plane (nor the survivors) when they started searching the area a week later. The island has no running water, so while Earhart and/or Noonan might have lived for a while, they probably ending up dying of thirst [source: King].

Author's Note: Why can't we solve the Amelia Earhart mystery?

When reading about Amelia Earhart's disappearance and the longstanding search for clues to her fate, I (Chris) can't help but start singing "In the Aeroplane Over the Sea," the title track from Neutral Milk Hotel's critically acclaimed 1998 album. I also can't help but think about how frontman Jeff Mangum's Earhart-like disappearance from the stage after the album's release has helped him cash in on the album's steadily increasing popularity 15 years later. Mangum became an indie rock hermit of sorts following the critical success of the band's second album, popping up every once in a while to play a song or two or host a radio show. In the meantime, the legend of Neutral Milk Hotel grew. Last year, Mangum decided to come out of hiding. Since then, he and his bandmates have been playing sold-out shows around the world as listeners young and old flock to hear tracks from a little album recorded when many of them were in grade school. Maybe Earhart's just holding out for a good deal.