The Rise and Fall of the Oregon Trail

by Mark Mancini Sep 30, 2019
Old wagon tracks wind through Scottsbluff, Nebraska, on the Oregon Trail. Thousands and thousands followed the trail to get to the West. Library of Congress

On May 1, 1839, 17 men left the courthouse square in Peoria, Illinois. Their goal was to travel beyond the Rocky Mountains and settle the Oregon Country, a disputed territory that encompassed present-day Oregon, Idaho, Washington state and British Columbia. Led by an attorney named Thomas J. Farnham, this little party carried a flag that read "Oregon or the grave."

Death was a distinct possibility. During the 18th century, American pioneers flocked to the Pacific Northwest. Untold thousands of lives were lost along the way.

Most of these migrants took the same general course: A 2,170-mile (3,490-kilometer) route that extended from western Missouri to the Willamette Valley in what's now Oregon state. This highway for mules, covered wagons and ambitious souls became known as the Oregon Trail.

And a gap in the Rocky Mountains made its existence possible.

The Rocky Mountains begin in New Mexico and continue northward into the upper recesses of British Columbia. But the mountain range doesn't go uninterrupted. One notable gap occurs in southern Wyoming, where the Rockies are punctuated by a flat, grass-covered prairie that's aptly called the South Pass.

For thousands of years, its existence was known only to indigenous people. Then in 1812, the fur trader Robert Stuart caught wind of the pass and ventured through it with six companions and the aid of a Native American guide.

David Wolf is the executive director of the Legacy of the Plains Museum in Gering, Nebraska. He says the 1812 "discovery" of the South Pass would go on to inform the trajectory of the Oregon Trail.

"The Rocky Mountains are very difficult to traverse on horseback," Wolf says via email. "Once the South Pass was discovered in Wyoming, it made the trek a lot easier. The South Pass is a very flat, very wide cut through the mountains."

This, he explains, is why Oregon-bound pioneers overwhelmingly preferred to travel through southern Wyoming by way of the Nebraska panhandle (where Gering now resides).

A few years after Stuart crossed the South Pass, representatives from Great Britain and the United States met to discuss the fate of the Pacific Northwest.

Much of the current U.S.-Canadian border was established with the signing of the historic Treaty of 1818. The document declared that all the land from the Lake of the Woods to the Rocky Mountains that fell below the 49th parallel belonged to Uncle Sam. Meanwhile, the aforementioned Oregon Country would be jointly controlled by Brits and Americans for a period of 10 years. In 1827, the shared occupation policy was extended, but some big changes were on the horizon.

It was against this backdrop that the Oregon Trail as we now know it first became popular.

Early on, the cross-country route was predominantly used by fur-trappers seeking northwestern beaver pelts. But they weren't the only demographic to take advantage of the trail. During the 1830s, the Oregon Trail became a magnet for Christian missionaries like Jason Lee who were looking to proselytize to Native Americans while they also spread their faith in the Pacific Northwest. Other emigrants simply wanted to procure a better life for themselves — and snag some open farmland.

The exact number of travelers who took the Oregon Trail has been lost to the sands of time. However, according to Wolf, it's been estimated that "around 400,000 people" made the trip.

By the early 1840s, there were enough American settlers in Oregon to establish a provisional government. On July 5, 1843, the Oregon provisional government passed an act that allowed single white men to claim 320 acres (129.4 hectares) of land in the region. By extension, married couples were eligible to claim up to 640 acres (259 hectares).

Unfortunately, the same body also enacted measures specifically designed to keep African-American out of Oregon. To this day, the state grapples with the aftermath of those racist policies.

As intended, the provisional government's actions triggered a westward exodus of white families into the Oregon Country. Available farmland, after all, was hard to come by in eastern states. The U.S. Bureau of Land Management reports that in 1843 alone, "almost 900 people" trekked across the Oregon Trail, with plenty of cattle in tow.

Devil's Gate, a fissure in the mountains of what is now Natrona County, Wyoming, was a noted landmark along the Oregon Trail.
Library of Congress

Three years later, Great Britain and the United States reached an agreement about the Pacific Northwest's political future. Under the Oregon Treaty of 1846, nearly all of the disputed lands below the 49th parallel were handed over to the U.S. (Notably, British Canada retained all of Vancouver Island.)

An act of Congress in 1850 recognized most of the land claims that were made under Oregon's provisional government. The policy of doling out free land to northwestern migrants continued until 1854, when a fee of $1.25 per acre was imposed — and a cap of 320 total acres (i.e.: 129.4 hectares) per new claim was enforced.

Those terms were attractive enough to keep the hopeful settlers streaming in. Their preferred mode of transportation was a covered wagon. Pulled by mules, horses or oxen, these consisted of rectangular, box-shaped "beds" with removable canvas covers. A typical wagon in those days could carry loads of 1,600 to 2,000 pounds (725 to 907 kilograms).

"People packed various things, but what they arrived with was a different matter," Wolf says. Littering was rampant along the Oregon Trail: Travelers left everything from old furniture to dinnerware scattered across the American countryside.

"With limited space on the wagons, they had to have some food, repair tools, spare parts and maybe some family heirlooms," Wolf explains. "With very [few] settlements/forts along the way, they had make sure they had enough supplies."

Most families traveled in wagon trains, organized caravans that sometimes contained more than 1,000 individual settlers. Mind you, these didn't always follow the exact same course. On their way through Missouri, Nebraska, Wyoming and other states, wagon train pathways covered vast expanses of land. "The trail got very wide," notes Wolf.

And it was full of graves. Conservatively, about 4 to 6 percent of all the emigrants who took the Oregon Trail died along the way. Many a wagon train was devastated by cholera, dysentery and other diseases. "You also had death from fording dangerous rivers, snake bites [and] accidents... like getting run over," Wolf says.

Following the completion of America's first Transcontinental Railroad in 1869, the Oregon Trail's heyday came to an end — though some families were still using it in the 1890s. Although its golden age is long past, there's no denying that this beautiful but punishing route changed America forever.

NOW THAT'S INTERESTING
In 2010, brothers Rinker and Nick Buck re-traced as much of the historic Oregon Trail as they could in a replica wagon pulled by a team of mules. Altogether, it took the pair around four months to get from Kansas City, Missouri, to Portland, Oregon.

Is There a Scientific Strategy for Finding a Good Parking Spot?

How the St. Louis Arch Stands Against All Odds 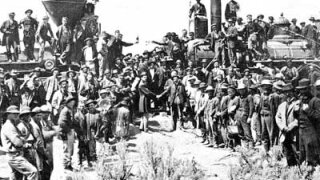 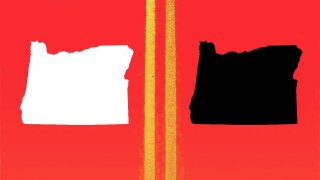 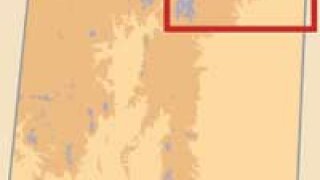 Searching for the Lost Horizon of Shangri-La
March 31, 2020