by Jane McGrath
Prev NEXT
7

"The Bridge on the River Kwai" 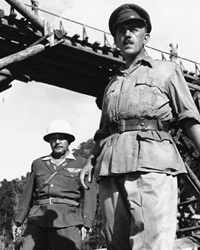 Alec Guinness, right, is shown in this scene from the film "Bridge on the River Kwai."
AP Photo

Although h­ailed as a fascinating portrayal of the ethical dilemmas facing Allied POWs held captive by the Japanese in World War II, "The Bridge on the River Kwai" (1957) was seen as a slap in the face to one esteemed, real-life British officer.

The movie centers around the character of British commander Col. Nicholson, a role that earned actor Alec Guinness a Best Actor Oscar. Nicholson arrives in a Japanese POW camp, where the Japanese are forcing the men to build a bridge that will be instrumental in their military tactics. As the highest-ranking Allied officer, Nicholson takes charge of the operation. Much to the surprise of his fellow officers and to the delight of the Japanese commander, Nicholson seeks to improve his men's morale by forcing them to build a solid, well-constructed bridge. Not until the dramatic end does the obsessive Nicholson recognize the folly of assisting the enemy in war and destroy the bridge.

Although his name wasn't Nicholson, Lt. Col. Philip Toosey was the senior British officer who commanded operations for building the Thai-Burma Railway, the inspiration for the movie. Those who knew the real story objected that it tainted Toosey's honorable reputation. Toosey's obsession was not building the bridge, but rather keeping his men alive. His admirers claim he did the best he could to keep his men safe while not giving aid to the enemy.