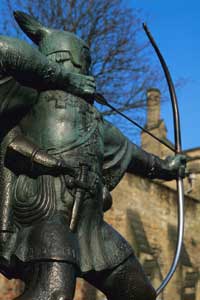 Literary references of Robin Hood -- beloved today as a vigilante outlaw and rebellious philanthropist -- stretch back to at least the 14th century. Retold in countless variations, Robin Hood's resume has been expanded and enriched extensively during the intervening centuries. Poets, playwrights and directors have all seized on the good outlaw theme and run with it, breathing new life into the legend again and again. This in turn has led many researchers to sort through the annals of the past, attempting to uncover the man behind the myth, the real Robin Hood who inspired such a devoted following.

But history is as murky as a forest blanketed in predawn fog. Discerning the truth through hundreds of years of repetitive studies and speculations is like trying to hit a target with an arrow while blindfolded. Plus any pertinent facts and public records, ones that could determine the verdict once and for all, likely either no longer exist or possibly never existed in the first place. But which is the case?

Scholars and amateur enthusiasts have pored over scraps of such records and remnants of text trying to piece together the puzzle of one of history's most renowned characters. However, whether he was a character in the sense of an actual personage, or simply a character in the fictional sense, remains inconclusive.

On the next page, we'll take a look at some of the different attempts to dig deep into the past and pull a rogue with a heart of gold from the pages of history. We'll also discuss why any potential answers might not be as clear-cut as they seem initially. 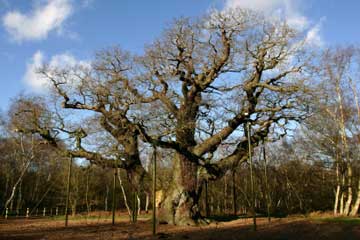 Robin Hood: Then and Now

Surprisingly, contemporary enthusiasts still sometimes come out with claims that they've nabbed the elusive outlaw. Here's an example of one such candidate. In his 2004 book "Robin Hood: The Real Story," Brian Benison claims Robin Hood is actually a nickname similar to Billy the Kid and that a fellow named Roger Godberd is the man behind the mystery. According to Benison, Godberd lived in the 13th century and started off as a friend and hunting buddy of the sheriff of Nottingham, Reginald de Grey, until local politics forced the two into different camps. After four years as an outlaw (and sans a seductive Maid Marian) Godberd was finally captured, jailed and eventually pardoned. He returned to his farm and lived out his remaining days peacefully.

Whether or not Robin Hood really existed, one thing is for certain: The details of his life probably would have been vastly different from what is presented in movies, books and plays today. Many researchers have tracked the evolution of the Robin Hood saga over the centuries and the earliest known texts describing the outlaw do not closely resemble modern iterations. For example, early tales and ballads of Robin Hood did not take place during the rule of Richard the Lionheart, nor did they contain any mention of Maid Marian. The Gest ballad described only two grand gestures modestly resembling the altruism that later became a fundamental staple in the Robin Hood legend. Also, Robin Hood was a yeoman, not a fallen nobleman; and his main haunts were areas of Yorkshire as opposed to Nottinghamshire and Sherwood Forest. Those additions, seemingly so integral to the story today, were invented by later authors -- although that's not to say the original Robin Hood's traits don't pop up now and then, casting him in all his free-spirited outlaw glory.

The living myth has evolved and expanded during the many intervening years in the hands of countless creative storytellers, so the Robin Hood we know today exists outside the realm of the original creation -- and apart from the man himself, if indeed he existed.