It must have been unnervingly quiet as John White made his way through the abandoned settlement at Roanoke in 1587. In the three years since he'd left, the colonists on Roanoke Island had vanished without a trace. What horrors had taken place here? Where had his family and the others gone?

What had once been a settlement of two-story, thatched-roof cottages was lost. The first seed of English presence in the New World, given purchase through the efforts of 115 people, had been uprooted inexplicably. In its place, a husk remained. The houses had all been taken down. A roughly built fort surrounding the former settlement was all that signaled the former presence of the colonists. And on a post was carved one of only two clues: the word "CROATOAN." On another tree, White found the carving "CRO."

That was it. The small cannons and boats that should have been situated at the nearby bay were gone. Chests with drawings, maps and books that White had buried nearby years earlier were torn apart and ruined by weather. There were no bones, no corpses – no evidence one way or another to show what had befallen the colonists, save for the evidence provided by their hastily assembled fortress. These 115 people were lost forever, never to be heard from again.

This group of settlers came to be known as the lost colony of Roanoke. The shroud of mystery surrounding their fate has kept them alive in the annals of U.S. history as much as the successful colonies that followed.

There were two expeditions to Roanoke before what would become the lost colony was established in 1587. The first was exploratory, the second (in 1585) consisted of 100 men who lived on the island for 10 months before returning to England. These early expeditions quickly deteriorated any initial warm feelings the Native Americans had toward the English. The settlers routinely kidnapped local tribal leaders and held them for ransom, despite relying on these "savages" for food and supplies [source: Lane].

When the 100 men left the 1585 Roanoke colony, it was due to constant threat of attack and waning food. Had they stayed for two more weeks, the men would've received supplies from England. A ship arrived and, finding the colony deserted, left behind 15 soldiers to maintain an English presence in the New World until another group of colonists could be brought.

This next group would become the lost colony of Roanoke. The 1587 settler population included women and children and looked much more like later successful colonies. Their arrival at Roanoke Island was an inauspicious one: They found the settlement abandoned and in shambles. The bones of one of the 15 soldiers there before them were the only physical evidence of what had befallen the previous settlers.

Led by Gov. John White (who'd been a member of the 1585 colony), these fresh colonists sought to carve out a life on the North Carolina island. They managed to turn the tide of bad relations with one nearby tribe, Powhatans living on Croatoan Island. The other tribes in the area maintained their distance. This left the colonists dependent on supplies from England, and in August 1587, Gov. White left to gather more provisions. When he returned, he found that the colony – including his daughter, son-in-law and granddaughter (Virginia Dare, the first English child born in North America) – was gone.

The carved word "CROATOAN" was an obvious clue. Perhaps the colonists had moved in search of protection or a steady food supply from the Powhatans. It appeared they hadn't left under duress; there were no Maltese crosses carved anywhere, the agreed-upon signal the colonists would use to indicate that danger had befallen them [source: Encyclopedia Virginia].

Yet no search of Croatoan Island was ever launched. Subsequent expeditions to locate the lost colony either failed or were undertaken as an excuse for piracy or other commercial endeavors. It wasn't until the Jamestown Colony was established in 1607 that any earnest searches were conducted to discover the fate of the lost Roanoke colonists.

Not only were the colonists themselves lost, the colony was as well. Poor record keeping among White and others as well as years of abandonment have kept the exact whereabouts of the 1587 colony a mystery. Numerous digs on Roanoke failed to produce any evidence of the lost colony. Remnants of the 1585 settlement have been discovered, but no evidence of the lost colony has been found. One problem is that primary sources tell different tales. From Gov. White's writings, the second settlement should be located near the first on the north end of the island. But a 1589 affidavit of a Spanish sailor puts the settlement near the center of the island where the cannons were stationed.

An old well and a small cannon found near the bay support the Spaniard's deposition. Some historians now believe that the 1587 Roanoke settlement currently lies underwater, victim to centuries of erosion.

For 400 years, Europeans have searched to uncover the truth behind the lost colony. Some interesting clues turned up early on, beginning with the Jamestown settlers.

Roanoke Mystery: Evidence and Theories of the Lost Colony

So, what happened to the Roanoke colonists? Ultimately, no one knows for sure. When it comes to the lost colony, historians are long on theories but short on hard evidence. Gov. John White, the first person to discover the colonists' disappearance, reported everything he saw in a letter. There were no bones, like those that had been left behind from the 1585 colony. The houses had been "taken downe," not destroyed or burned [source: Encyclopedia Virginia]. The "CROATOAN" carving didn't indicate distress with a Maltese cross. Everything pointed to the settlers simply having picked up and left.

According to White's letter, the colonists were prepared to move "50 miles to the maine." This could mean that they moved to the mainland, into the forests of North Carolina [source: Keiger].

In the opinion of Johns Hopkins University anthropologist Lee Miller, the colonists were deliberately left at Roanoke by Sir Francis Walsingham, secretary of state to Queen Elizabeth I, in hopes that the colony would not survive, to bring down Sir Walter Raleigh, a favorite of the queen. Raleigh, who had funded the expeditions to Roanoke, had received a patent to all the land in the New World he could settle, but he had wanted the last group to settle in the Chesapeake Bay area instead. The colonists inadvertently wandered into a violent shift in the balance of power among inland tribes. Indians with whom the colonists were friendly lost their hold over the area, and Native Americans hostile to the settlers took control. If the Roanoke colonists made the trip inland when this happened, the men would've likely been killed and the women and children captured as slaves. The colonists would have then been traded along a route that spanned the U.S. coast from present-day Georgia to Virginia [source: Keiger].

It's also conceivable that the colonists met a less violent fate and went to Croatoan Island which was 50 miles south of the settlement . The Jamestown colonists sent out several search parties to find members of the lost colony and made a habit of questioning any Native Americans with whom the Jamestown members made contact. Some of these natives told tales of white settlements further down the coast, with two-story, thatched-roof houses, a style unique to the English. Others told of nearby tribes who could read English and dressed similarly to Europeans. Perhaps the most dramatic report from Jamestown was the sighting of a boy dressed as a native. He had blond hair and was fair-skinned.

These reports corroborate the most widely held theory of what became of the Roanoke colonists: They assimilated into some friendly Native American tribe. Over the course of generations, intermarriage between the natives and the English would produce a third, distinct group. This group may be the Lumbee tribe.

The Lumbee tribe is native to North Carolina, yet no certain lineage can be pinned down. The tribe's oral history links them to the Roanoke settlers, and this tradition is supported by some of their surnames and the tribe's ability to read and write English. Family names of some of the Roanoke colonists, like Dial, Hyatt and Taylor, were shared by Lumbee tribe members as early as 1719. The settlers who met them were astonished to find Native Americans that had gray eyes and spoke English. Even within the Lumbee tribe, the veracity of the group's link to the Roanoke colonists is in dispute. The Lumbee Connection, as it's come to be called, is intriguing.

Recent excavations in Bertie County, North Carolina continue to pick away at the mystery. There, at a location called Site X (as in "X marks the spot"), archaeologists have found dozens of English-style artifacts dating to the 1500s. The site, which is situated near the mouth of Salmon Creek, was notably near a major Native American community named Mettaquem. New finds from excavations included lead seals from bales of cloth, firearms components, and tenterhooks meant for stretching animal hides. At an adjacent site (aptly named "Site Y") searchers discovered eight different types of ceramics [source: Emery].

It's possible that a severe drought and subsequent inability to grow crops drove the colony from its original location to Sites X and Y. Historians believe that Sites X and Y might've been a fallback community of sorts, featuring small numbers of the English settlers – not the entire colony. This fragmented group may have been quickly integrated into the local native tribes, diluting their English blood and erasing a record of what happened to the original colony.

For now, the research continues. In 2019, historians and archaeologists alike were buoyed by the N.C. Coastal Land Trust, which bought the lands around Site X and Y to save them from being turned into a housing development. That land is now under state control and will be turned into a natural preserve, one where researchers can continue their work without fear that their sites will be bulldozed and converted into housing [source: Lawler].

So, the painstaking excavations will continue for the foreseeable future. Perhaps one day soon, they'll unearth the clues that finally bring closure to the mystery of Roanoke's long-lost colony.

Up Next
History of North Carolina
Explore More 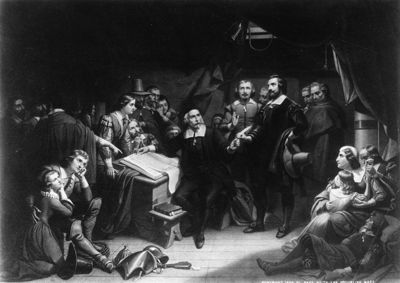