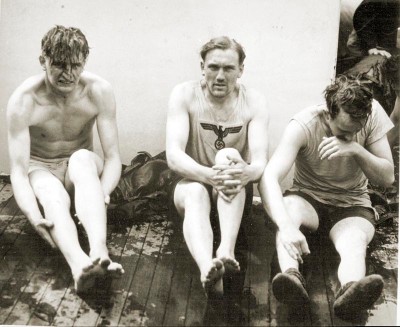 By February 1943, momentum in the second World War seemed to have shifted somewhat. Yet critical Allied World War II victories on Guadalcanal and at Stalingrad have to be put into perspective. In both cases, the overwhelming bulk of enemy armed forces remained undefeated. In each instance, victory was geographically remote from the enemy heartland. The Allies understood that winning the war would be a long, drawn-out, and costly endeavor.

The turning points that are familiar to us now were less clear-cut at the time. In most cases, small victories were important in order to keep the Allied populations committed to an otherwise demoralizing and indecisive war. In February 1943, Adolf Hitler's propaganda minister, Joseph Goebbels, asked an audience in Berlin, "Do you want total war?" His audience clamored approval, but the mood among Nazi Germany's non-Nazi loyalists was somber and fearful. The changing expectations on both sides also played an important part in determining an outcome that was still more than two years away.

Just days before the German surrender at Stalingrad on January 31, 1943, President Franklin Roosevelt and Winston Churchill met for a high-level conference in the Moroccan city of Casablanca, recently captured in Operation Torch. There they discussed the future direction of the war. They gave the European Theater priority, but they would not commit to an invasion of Northern Europe until the Atlantic could be made safe for the mass transport of men and supplies. While the naval struggle continued, they agreed, the two Western states would capitalize on success in North Africa by continuing a Mediterranean strategy against Benito Mussolini's Italy. They would also maintain a relentless bombing campaign against the European Axis states to ease the pressure on the Red Army. This Combined Bomber Offensive was the Allies' substitute for a second front, which was deemed too risky in 1943.

At the final press briefing of the conference, President Franklin Roosevelt -- in agreement with Winston Churchill -- announced that the enemy states had only one option open to them: "unconditional surrender." Though secret contacts were occasionally made between individuals on both sides with a view to brokering an agreement, Roosevelt's public statement committed the Allies to a fight to the finish. No room was put aside for maneuver or compromise.

After a year in which the Allies lost 7.8 million tons of shipping, the submarine threat was expected to get worse during 1943. But a fortunate set of tactical changes tilted the balance in the Allies' favor. Most important was the adoption of new forms of radar on ships and aircraft as well as the transfer of adequate numbers of long-range planes to patrol the sea lanes. In May 1943, the German navy lost 41 submarines while Allied merchant vessel losses dropped sharply. Over the next two months, a further 54 submarines were sunk, prompting the German naval commander-in-chief, Admiral Karl Dönitz, to withdraw from the North Atlantic. The Allies' victory over the submarine menace was a critical one, for it made possible the full extension of American military and economic power into the European Theater.

That power was principally represented in the air in 1943. The Combined Bomber Offensive was officially launched as Operation Pointblank in June 1943, although British Bomber Command and the U.S. Eighth Air Force had begun around-the-clock bombing -- the British by night, the Americans by day -- from the winter of 1942-43. The offensive was aimed at the enemy's military-economic complex -- the source of German airpower and the morale of the urban workforce.

Efforts to attack identifiable industrial or military targets could not be achieved with prevailing technology without a high cost to civilians. Over the course of the war, more than 420,000 German civilians would die from the bombing attacks; a further 60,000 civilians would be killed in attacks on Italian cities.

The bomb attacks immediately affected German strategy. The Germans established a large air defense sector. To do so, they had to withdraw valuable resources of manpower, artillery, shells, and aircraft from the military front line. There, German armies were forced to fight with shrinking air cover. Though military production continued to rise in Germany during 1943, the increase was much lower than it would have been otherwise. Bombing placed a ceiling on the German war effort and brought the war to bear directly on German and Italian society.

The Allies capitalized on these growing advantages. In North Africa, the Axis forces that were bottled up in Tunisia were slowly starved of supplies by Allied naval and air power in the Mediterranean. By May 13, when the battle was over, 275,000 Italian and German troops had surrendered.

The Allies' pressure at sea, in the air, and on the southern front made the Axis task in the Soviet Union more difficult. Following the collapse of the German assault on the Caucasus and Stalingrad, the Red Army became overly ambitious. After the Soviets pressed the German army back, a swift counteroffensive around Kharkov in early 1943 was a reminder that the huge German army remained a formidable foe. Adolf Hitler listened to the advice of his generals, who argued that in summer weather, with good preparation, they could smash a large part of the Soviet army in a single pitched battle. They chose a large salient that bulged into the German front line around the city of Kursk as their battleground.

Operation Citadel lacked the geographical scope of previous operations, but it became one of the largest set-piece battles of the whole war. It followed a classic German pattern: Two heavily armored pincers would close around the neck of the salient, trapping the Soviet armies in the salient and creating conditions for a possible drive into the areas behind Moscow. Manstein, who commanded the southern pincer, wanted to attack in April or May, before the Red Army had time to consolidate its position. But Adolf Hitler, in agreement with General Model (who commanded the northern pincer), ordered a delay until German forces were fully armed with a new generation of heavy tanks and guns -- the Panthers and Tigers.

The Soviets, for the first time, guessed the German plan correctly. Stalin had to be persuaded by Georgi Zhukov and the General Staff that a posture of embedded defense was better strategy than seeking open battle against a powerful mobile enemy. Stalin accepted it only because the defensive stage was to be followed by a massive blow struck by Soviet reserves against the weakened and retreating German armies. In May and June, a vast army of Soviet civilians turned the Kursk salient into a veritable fortress, and they waited for the Nazi attack.

See the next section for a detailed timeline on the important World War II events that occurred during early February 1943.

The War in Italy

Italy had been a seat of empire for centuries, but collapsed after World War I. Learn more about the dramatic changes in Italy in the early 20th century: