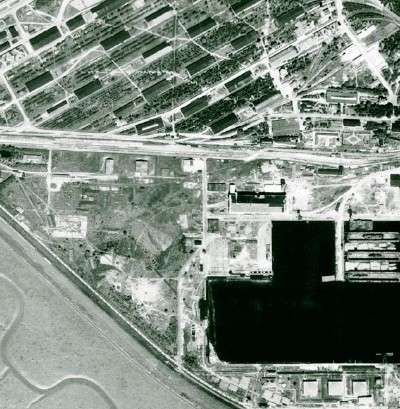 Wilmshaven, Germany before the bombing

In late February 1943 the Russians retook the city of Kharkov in the battle for the Soviet Union. This and other pivotal World War II events are summarized in the timeline below.

February 10: Mohandas Gandhi stops eating in protest of Britain's detention of India's independence-seeking Congress Party leaders. He vows to consume only diluted fruit juice for the next three weeks.

February 11: The Allied assault on the U-boat program continues with the first of a series of intense British Royal Air Force (RAF) raids on the German port of Wilhelmshaven.

February 14: The RAF launches a nighttime bombing raid against the northern Italian city of Milan.

The Allies suffer a setback in Tunisia, as the Axis drives back Allied forces with the capture of the city of Sidi Bou Zid.

February 15: A German panzer unit withdraws from the Russian city of Kharkov in defiance of an order from Hitler to stand against the Red Army. The Soviets will retake the city the next day.

The Vichy French government institutes a mandatory labor program to which young adults must devote two years of their lives.

February 18: A prototype B-29 long-range bomber crashes into the Frye Packing Plant during a test-flight near Boeing's Seattle headquarters. The accident kills 31 people.

Madame Chiang Kai-shek makes a state visit to Washington. In a speech before Congress, she expresses confidence in a Japanese defeat.

February 21: The Wehrmacht attacks the Red Army in an attempt to retake the Russian city of Kharkov.

Below are more images and headlines detailing events of World War II and the Axis invasion.

Before and after aerial photos of the bombing of Wilhelmshaven: The German port city of Wilhelmshaven was bombed twice in 1943 -- once by the USAAF on January 27, and again by the RAF Bomber Command on February 11-12. These aerial reconnaissance images show Wilhelmshaven before and after the two bombings. The second bombing, carried out at night, was especially challenging because of dense cloud cover. Planes equipped with the RAF's newly developed H2S ground-mapping radar located strategic targets, then illuminated them with parachute flares. A successful strike on a naval ammunition dump south of Wilhelmshaven caused widespread destruction of dockyards and the city.

Air Force machine gunner most dangerous position: U.S. Army Air Force machine gunner Sergeant William Watts fires at enemy planes from a bomber over Europe in 1942. Almost 300,000 aerial gunners were trained during World War II -- a substantially greater number than were trained as pilots, navigators, or bombardiers, and for good reason. A bomber's very survival depended upon the gunners' skill at fending off enemy planes. Gunners also held the crew's most dangerous and physically disagreeable positions. They were unprotected by armor, and because of high altitudes, they sometimes had to endure temperatures as low as ­minus-60 degrees Fahrenheit.

Adolf Hitler loses support of some generals: Adolf Hitler and his generals study maps in February 1943. From the left are General Field Marshal Erich von Manstein, Adolf Hitler, General Theodor Busse, and General Field Marshal Ewald von Kleist. Hitler had made himself supreme military commander early in the Nazi reign. In December 1941, he became commander-in-chief of the German army. By 1943 devastating failures on the Eastern Front and in North Africa had convinced some German generals that they could save their nation only by getting rid of the Führer. However, a bomb placed on a plane carrying Adolf Hitler to Smolensk in March failed to go off, and several other attempts on the Führer's life also failed.

World War II generated many words that concealed rather than clarified meaning. Over the span of the war, numerous euphemisms were added to the languages of the belligerent nations.

The Japanese, for example, described their empire as the Greater East Asia Co-Prosperity Sphere, despite their ruthless exploitation of Southeast Asia's people. Japanese commanders used the word tenshin ("to advance in a different direction") rather than admit to retreat. After the war, the Japanese devised the term comfort women to conceal the reality of thousands of women coerced into military prostitution.

Many Allied euphemisms also carried propaganda meanings. Lend-Lease was neither a loan nor a lease, but a gift not expected to be repaid. Japanese-Americans were interned in camps blandly called relocation camps. Psychologically wounded RAF airmen unable to continue flying were stigmatized for their lack of moral fibre. The air war also generated the term precision bombing -- which was usually anything but. De-housing workers meant razing whole cities and killing their people.

The Nazis perfected the use of euphemisms. Resettlement in Poland meant the deportation of Poles to death camps. Special duties units exterminated Europe's Jews as part of the Final Solution to the Jewish question.

Correspondents on both sides talked glibly about mopping up, a phrase that got under the skin of American general Robert Eichelberger. "If there is another war," he stated, "I recommend that the military, and the correspondents, and everyone else concerned, drop the phrase 'mopping up' from their vocabularies. It is not a good enough phrase to die for."