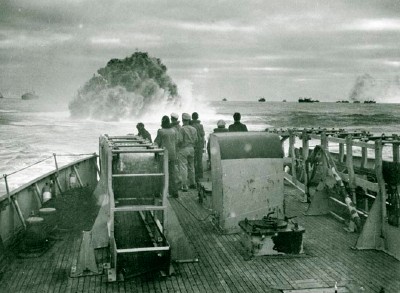 In March 1943 the Nazis began shutting down the Jewish ghettos in Poland, sending the residents to death camps such as Auschwitz. The timeline below summarizes this and other World War II events from March 1943.

March 2: In the wake of a devastating defeat at the hands of the Red Army, Benito Mussolini pulls Italy's surviving troops from the Eastern front.

An Allied attack on a Japanese troop convoy en route to New Guinea culminates in the Battle of the Bismarck Sea. The Japanese will suffer heavy losses.

March 3: Nearly 180 Londoners die after a woman trips entering an Underground station serving as an air raid shelter. The crowd rushing to get under cover presses in and suffocates the fallen.

The RAF conducts test-flights of the Gloster Meteor, its first fighter plane powered by a jet engine.

The Allies lose 13 supply ships when a North Atlantic convoy is attacked by German U-boats.

March 10: Congress moves to extend the Lend-Lease Act, which would allow the United States to continue to supply the Allies with war materials without any expectation of repayment.

March 13: Some 14,000 Jews are sent to Auschwitz and other death camps as the Nazis begin to shut down the Jewish ghetto in the Polish city of Kraków.

An attempt on Adolf Hitler's life fails when the chosen weapon, a bomb made of plastic explosives, fails to detonate.

Below are more images and headlines detailing World War II events and the Axis and Allied campaigns of 1943.

Allied make significant gains in North Africa: In the fall of 1942, General Montgomery's Eighth Army inflicted a significant defeat upon General Rommel's Afrika Korps at El Alamein in Egypt. At last the tide of German successes had turned, as Alamein now opened the way for a general advance westward by the British. Simultaneously, Anglo-U.S. landings (Operation Torch) at Casablanca, Oran, and Algiers were largely unopposed by the Vichy French defenders. Tripoli fell on January 28, 1943, and in February the Allies entered Tunisia -- where U.S. forces suffered a costly reverse at Kasserine Pass. However, the end was in sight, and the remaining Axis forces in North Africa surrendered on May 12.

Next is another World War II timeline tracing major events of March 1943, including an attempt on Adolf Hitler's life.

The words "Arbeit Macht Frei" ("Labor Liberates"), displayed prominently above the entrance of the camp at Auschwitz in Nazi-occupied Poland, exemplified the deceitfulness and hypocrisy of the Nazi regime. Auschwitz was a facility dedicated not to the liberation of its inmates but to their systematic extermination in accordance with the plan for a "Final Solution" of the "Jewish question."

Auschwitz was the most notorious of the Nazi death camps in Poland, whose overall purpose was the extermination of Europe's Jews, together with Gypsies, homo­sexuals, and many other groups considered socially, politically, or racially undesirable. Treblinka, Sobibór, Majdanek, Belzec, and Chelmno were the other main extermination camps, aka death camps (not to be confused with the concentration camps, which had primarily penal, economic, and slave-labor functions). These extermination camps were designed to kill on an industrialized scale, this being achieved most efficiently through the use of gas chambers. The resulting corpses were burned in purpose-built crematoriums.

The victims usually arrived at the death camps by rail, often after days traveling in sealed cattle wagons under the mistaken impression that they were being "resettled" -- an illusion scrupulously maintained by the Nazi guards and camp staff until the very end. Europe's extensive rail network readily facilitated the mass movement of these people, with railway lines that often terminated at the very gates of the camps.

On arrival, those chosen for immediate extermination -- the aged, the infirm, children, and men and women deemed useless -- were separated from those assessed as suitable for slave labor. Thereafter, those destined for immediate death were led to the camp "bathhouse," where they were ordered to store their personal effects and then strip to "shower" after their long journey. Any remaining illusions were finally shattered as the "bathhouse" doors were locked behind them. At that point, the deadly Zyklon B gas crystals were dropped into what was in reality the gas chamber, or carbon monoxide was pumped in. About four million people died in the extermination camps.