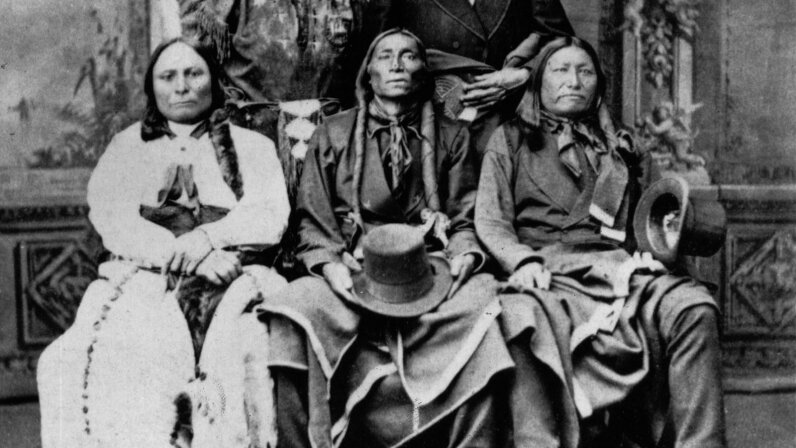 Let's face it, America's history is not exactly neat and ti­dy. When white settlers arrived in America, they realized they had a big problem: there were people already living there!

These Native Americans tried various tactics to deal with the European intruders. They tried talking it out, bu­t most of the settlers were afraid of these seemingly primitive people. They tried living harmoniously, by signing tr­eaties for shared land, but the U.S. government had a knack for going back on its word. They even resorted to fighting and won some victories, though the war would eventually be lost along with nearly all of the land they had left.

­Despite the hardships, some heroes emerged. The following figures represent the hundreds of tribal leaders who did everything they could to preserve the history and culture of their threatened people.

This Lakota leader played a major role in the Lakotas' long war against the United States. As a Hunkpapa Teton Sioux leader, he also served as commander of the Native American cavalry forces at the Battle of Little Bighorn. Gall was one of the most aggressive Sioux leaders in the final battles for preservation and resistance, though his story is not without controversy. Though he was Sitting Bull's chief military lieutenant during the Little Bighorn battle, he quarreled with Sitting Bull and retreated to Canada shortly thereafter. His talks with settlers did much to improve relations between the groups, but some felt he conceded too much and befriended too many white leaders. Regardless, Gall was integral to the history of the Native American plight.

For most of his life, Red Cloud was fighting. At first, it was to defend his Oglala people against the Pawnee and Crow tribes, but by the time he reached his forties, Red Cloud was fighting the white man. His efforts led to the defeat of Fort Phil Kearny in Wyoming in 1867 and kept soldiers at bay (and in fear) for the rest of the winter. In the two years that followed, the government signed the Fort Laramie Treaty and gave the Native Americans land in Wyoming, Montana, and South Dakota. But soon after, the Black Hills were invaded, and Red Cloud and his people lost their land. Until his death in 1909, Red Cloud tried other ways to make peace and preserve the culture of his people, working with government officials and agents to reach a fair agreement.

Hin-mah-too-yah-lat-kekt, aka Joseph the Younger

Born in 1840 in what is now Oregon, Joseph the Younger (also called Chief Joseph) had some big shoes to fill. His father, Joseph the Elder, had converted to Christianity in 1838 in an attempt to make peace with white settlers. His father's efforts seemed to work, for his Nez Percé people were given land in Idaho. But in 1863, the U.S. government took the land back, and Joseph the Younger's father burned his Bible and his flag and refused to sign any new treaties. When Joseph succeeded his father as tribal chief in 1871, he clearly had to deal with a rather delicate situation. He eventually agreed to move his people to the now smaller reservation in Idaho, but never made it. They came under attack by white soldiers, fought back, and then dealt with the wrath of the government. In an impressive battle, 700 Native Americans fought 2,000 U.S. soldiers successfully until Joseph surrendered in 1877. He died in 1904 from what his doctor reported was a broken heart.

At the tender age of 13, this legendary warrior was stealing horses from neighboring tribes. By the time he was 20, Crazy Horse was leading his first war party under the instruction of Chief Red Cloud. The Lakota warrior spent his life fighting for the preservation of his people's way of life. He amassed more than 1,200 warriors to help Sitting Bull defeat General Crook in 1876. After that, Sitting Bull and Crazy Horse joined forces, eventually defeating Custer at Little Bighorn. Crazy Horse continued to tirelessly defend his people's rights, but by 1877, there was little fight left in him. When trying to get to his sick wife, Crazy Horse was killed with a bayonet.

Historical figures are often described with embellishment, but rarely are they mythologized to Geronimo's levels. Geronimo's wife, children, and mother were killed by Mexicans in 1858. He led many attacks on both Mexican and American settlers and was known for his legendary war skills -- some even said he was impervious to bullets. But later in life, this fearless leader of the Chiricahua tribe of the North American Apache was forced to settle on a reservation, his group having dwindled to just a few people. He eventually died a prisoner of war in 1909 and is buried in Oklahoma.

He was president of the Cherokee Constitutional Convention of 1827 and, for the next ten years, worked with the U.S. government and his people to seek assistance and justice for the Cherokee. Even though several court rulings found the Cherokee to be the rightful owners of land, they weren't enforced, and, slowly but surely, Ross's efforts went largely unrewarded. Ross is known for leading the Cherokee to Oklahoma in 1838 on what is commonly referred to as the "Trail of Tears."

Not much is known about Pontiac's early life, but it is believed that he was born in the Detroit or Maumee River region to Ottawan parents, and, by age 30, he was a prominent figure within his tribe. After the French and Indian War, Pontiac was none too pleased with the British and their trading policies. He responded with widespread attacks against British forts and settlements in the Ohio region during 1763, which came to be known as Pontiac's Rebellion. However, neighboring tribes and other Native American leaders didn't like the way Pontiac conducted himself. Some felt he used a fake title of "chief" given to him by the white man to exert influence and enjoy undue power. Pontiac was killed by a member of the Peoria tribe in 1769.

Sequoyah, aka George Guess, aka Sogwali

If it weren't for Sequoyah, a huge piece of Native American culture might be missing. Thanks to this Cherokee born around 1766, the Cherokee language is not a mystery. Sequoyah created the syllabary, or syllable alphabet, for his people and taught the Cherokee how to read and write. The ability to communicate via the written word helped make the Cherokee Nation a leader among tribes everywhere. The giant sequoia tree is named after the man who felt that the pen would outlast the sword -- and he was right. Sequoyah died in 1843 of natural causes.

While Tecumseh, a Shawnee chief, was no stranger to battle, he is more often recognized for his diplomatic efforts in the Native American plight. Born in Ohio in the late 1760s, Tecumseh was an impressive and charismatic orator. In 1809, when the Treaty of Fort Wayne signed over 2.5 million acres to the United States, Tecumseh was outraged. He tried to get all the Native American nations to join together, claiming that the land belonged to the people who were there first, and no one tribe could buy or sell any part of it. Tecumseh's hopes were to create solidarity among all native peoples, but the idea came too late. Eventually, Tecumseh joined forces with the British and was killed in battle in 1813.

The principal chief of the Dakota Sioux was fierce, determined, and less than forgiving of the white miners who tried to take over the Black Hills in the late 1870s. Sitting Bull was born in 1831 and, while he earned a reputation for being ruthless in the Native American resistance efforts of his younger days, his big moment came in 1876. Trying to protect their land, Sitting Bull and his men defeated Custer's troops at the Battle of Little Bighorn. Sitting Bull then escaped to Canada. In 1881, he returned to America on the promise of a pardon, which he received. The legendary warrior then joined Buffalo Bill's Wild West Show, showcasing his riding skills and hunting prowess. But when he died at 69, Sitting Bull was still advising his people to hold on to their land and their heritage. 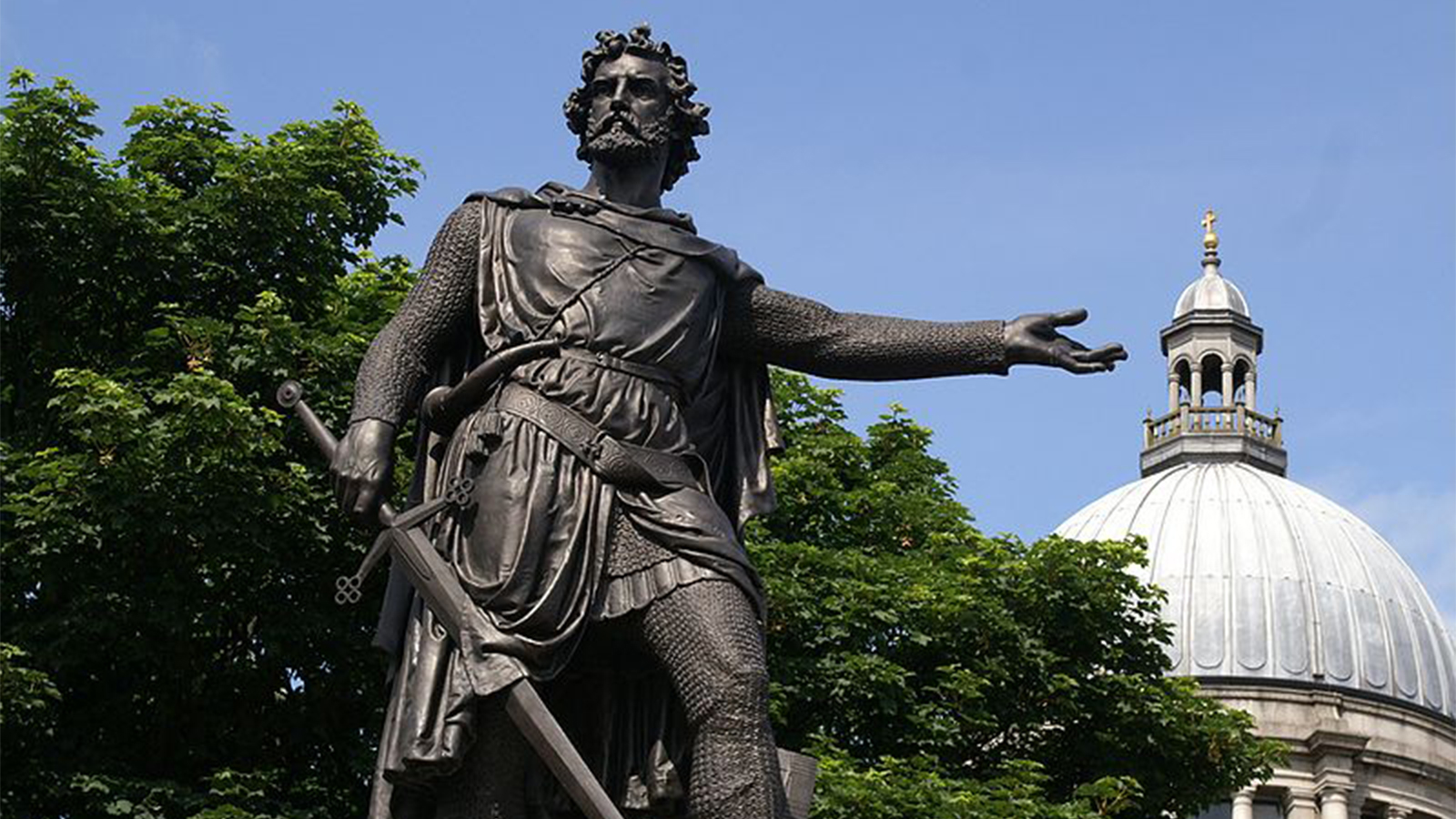