by Jane McGrath
Prev NEXT
5 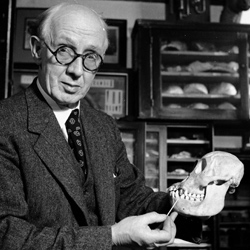 After ­Charles Darwin published his revolutionary "On the Origin of Species" in 1859, scientists scrambled to find fossil evidence of extinct human ancestors. They sought these so-called "missing links" to fill in the gaps on the timeline of human evolution. When archaeologist Charles Dawson unearthed what he thought was a missing link in 1910, what he really found was one of the biggest hoaxes in history.

The discovery was the Piltdown man, pieces of a skull and jaw with molars located in the Piltdown quarry in Sussex, England. Dawson brought his discovery to prominent paleontologist Arthur Smith Woodward, who touted its authenticity to his dying day.

Although the discovery gained world renown, the lie behind Piltdown man slowly and steadily unraveled. In the ensuing decades, other major discoveries suggested Piltdown man didn't fit in the story of human evolution. By the 1950s, tests revealed that the skull was only 600 years old and the jaw came from an orangutan. Some knowledgeable person apparently manipulated these pieces, including filing down and staining the teeth.

The scientific world had been duped. So who was behind the fraud? Many suspects have surfaced, including Dawson himself. Today, most signs point to Martin A. C. Hinton, a museum volunteer at the time of the discovery. A trunk bearing his initials contained bones that were stained in exactly the same way the Piltdown fossils were. Perhaps he was out to embarrass his boss, Arthur Smith Woodward, who refused to give him a weekly salary.