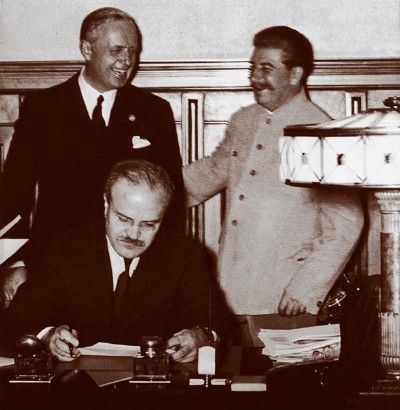 August 4: General Francisco Franco establishes authoritarian rule in Spain. He titles himself El Caudillo (The Leader) and asserts that he will answer only "to God and to history."

August 12: Military representatives from the Soviet Union, France, and Britain meet in Moscow to discuss an alliance. Talks will adjourn on the 19th without resolution, as Russia prefers an agreement with Nazi Germany.

August 12-13: Italian foreign minister Galeazzo Ciano informs Adolf Hitler that the Italian military would not be sufficiently rebuilt to fight alongside the Germans for another two years.

August 15: In a letter to French foreign minister Georges Bonnet, the French ambassador to Berlin describes a meeting with German officials in which he expressed the certainty that Britain, Poland, and France would go to war "automatically in case of aggression against any one of them."

August 20-31: In one of the largest battles since the Great War, the Soviets attack Japanese army units along Mongolia's Khalka River. Some 45,000 Japanese soldiers are killed, while 17,000 Soviets lose their lives.

August 22: Adolf Hitler calls a meeting of his military leadership at Obersalzberg and, in a chilling speech, leaves no doubt that he intends to "kill without pity or mercy all men, women, and children of the Polish race or language."

August 23: Nazi Germany's Axis ally, Japan, is stunned by the signing of the German-Soviet nonaggression agreement, known as the Molotov-Ribbentrop Pact. War is all but unavoidable, as the two powers agree to carve Poland in half.

August 24: In a last-ditch effort to avoid war, President Franklin Delano Roosevelt sends a personal appeal to Adolf Hitler, asking him to address the Polish issue through diplomatic channels.

Below are more highlights and images that outline the events of World War II and show the details of Adolf Hitler's final peacetime speech, as well as the significance of the Polish port city of Danzig in the late 1930s.

Adolf Hitler's last peacetime speech presents Nazi Germans as victims: Adolf Hitler makes his last peacetime public speech -- a two-hour rant to the Reichstag -- on April 28, 1939. Claiming to be a pacifist, Adolf Hitler spoke scornfully of President Franklin Delano Roosevelt, presented Nazi Germany as the victim of injustice, rejected the 1934 German-Polish nonaggression pact, and denounced the 1935 Anglo-German Naval Treaty (which supposedly restricted the size of the German navy). Broadcast to the world, the speech generated no surprise in Poland and elsewhere.

Soviets rout invading Japanese at Khalkin Gol: After a series of probes along the Mongolian border met with mixed results in 1937 and 1938, Japanese troops invaded Outer Mongolia and set up a defensive position in the Khalkin Gol mountains. Concerned for the security of the Trans-Siberian Railroad, Soviet Union leader Joseph Stalin sent his best commander, Lieutenant General Georgi Zhukov, to stabilize the region. Lieutenant Georgi Zhukov launched a swift and unexpected attack, using ground and air forces, on August 20, 1939, against the enemy position at Khalkin Gol. When the battle ended 11 days later, the Soviets had achieved a strategic victory. The Japanese 23rd Division was wiped out, with 18,000 dead.

The strategic significance of Polands's port city of Danzig: The Free City of Danzig was created by the Versailles settlement of 1919. Despite being a major port on Poland's littoral, it was placed under the direct supervision of the League of Nations. However, Danzig's population of 400,000 was overwhelmingly German; less than six percent was Polish. The Germans refused a Polish plan to partition the territory of the Free City that would give Nazi Germany the city itself. The Germans wanted war.

Germans, Soviets split Poland after signing a nonaggression pact: One of the great politico-strategic surprises of the war was the signing of the non­aggression pact between Nazi Germany and the Soviet Union on August 23, 1939. These two states' respective political ideol­ogies, fascism and communism, had been considered entirely irreconcilable. The treaty was signed by Reich minister for foreign affairs Joachim von Ribbentrop (top left) and Soviet foreign minister Vyacheslav Molotov (bottom left) in the presence of Soviet Union leader Joseph Stalin. This unlikely but undeniably pragmatic agreement provided for the German-Soviet partition of Poland.

Nazi Germany continued its aggressive campaign against Poland when it occupied Slovakia in late August 1939. Continue on to the next page for a detailed timeline on the important World War II events that occurred from August 24, 1939, to August 31, 1939.

On February 20, 1939, 22,000 people packed Madison Square Garden in New York City. They anxiously awaited the appearance of Fritz Kuhn, a German-born engineer and leader of the German-American Bund, a political group of anti-Semitic Nazi sympathizers. It was two days before George Washington's birthday, and a 30-foot-high portrait of the first president (called the first Fascist by the group) hung behind the podium, which was bordered by Nazi flags and swastikas. Fritz Kuhn was ushered into the arena by 3,000 Nazi uniformed guards. This was the greatest moment in the history of the Bund. It would also prove to be its last.

Bund members advanced their anti-Semitic and anti-Communist beliefs through newspapers, magazines, and demonstrations in American cities. The group also ran a number of social clubs and youth camps, which were modeled after the Nazi youth camps in Nazi Germany. With Adolf Hitler's support, Fritz Kuhn -- an American citizen -- was named leader of the organization in 1936. He carried the Bund's message across America through appearances, film strips, and support of other anti-Semitic groups, including the one led by popular Catholic priest Father Charles Coughlin.

Following his appearance at Madison Square Garden, Fritz Kuhn became a target for prosecution by government officials. He was convicted of embezzling money from the proceeds of the February 1939 rally and was sent to Sing Sing Prison that same year. Never reaching more than 25,000 members, the German-American Bund virtually disappeared after America entered the war.