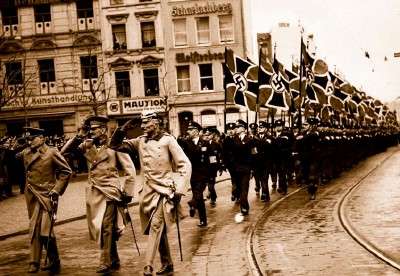 Nazi Germany's World War II offensive continued with a German air force bombing raid that destroyed the Basque city of Guernica. The World War II timeline below details this event as well as other important events that took place from November 1, 1936, to July 7, 1937.

November 1, 1936: Speaking to a crowd in Milan, Benito Mussolini coins the name "Axis" for Italy and its allies when he states that the "line between Rome and Berlin is not a partition but rather an axis around which all European states...can also collaborate."

November 25, 1936: The Anti-Comintern Pact is signed by Nazi Germany and Japan against the International Comintern but not against the Soviet Union.

December 1936: Chinese Nationalist leader Chiang Kai-shek is kidnapped by General Chang Hsueh-liang in order to force Chiang Kai-shek to devote more time and energy to confronting the Japanese, and not the Chinese Communists.

December 11, 1936: George VI is crowned king of England following the abdication of his brother, Edward VIII, who married Wallis Simpson, an American divorcée.

April 27, 1937: In support of General Franco, the German air force in Spain carries out a bombing raid that destroys the Basque city of Guernica.

July 7, 1937: Japanese troops meet resistance in China when they demand access to the town of Wanping, near Peiping. A skirmish ensues at the Marco Polo Bridge on the edge of town, providing the spark that will ignite the Second Sino-Japanese War.

Below are more highlights and images that outline the events of World War II and show the details of Chinese propaganda, as well as Italy's increasing war offensive in the mid-1930s.

Chinese propaganda posters communicate to a mostly illiterate nation: For centuries, Chinese rulers expressed their beliefs to their peasant population through propaganda posters. With pictures posted on walls, billboards, and other surfaces, the government was able to communicate to a population that was mostly illiterate. To the vast majority of the 500 million Chinese, there was little concern about the ultimate result of the war. Their daily struggle for survival would continue no matter who was running the country.

Benito Mussolini's Italian forces attack and prevail over Abyssinia: On October 3, 1935, in his fervor for empire, Italian dictator Benito Mussolini attacked the African nation of Abyssinia (present-day Ethiopia), which had successfully resisted Italian colonialism in 1889. Italian planes strafed rifle-bearing tribesmen with machine-gun fire and bombed mud-hut villages. Benito Mussolini's son proudly commented that the victims blew up like "a budding rose unfolding." The air attack was followed by Italian artillery, infantry, and the use of mustard gas. After a little more than seven months of fighting, Benito Mussolini's forces prevailed.

John Heartfield's biting criticism of the Nazis: German artist John Heartfield used politically charged images in works of political criticism. During WWI, he changed his name from Helmut Herzfeld to protest Germans' anti-British sentiment. After the Nazis rose to power, Heartfield exiled himself to Czechoslovakia and later to England. He put swastikas and other Nazi symbols to ironic use in his photomontages, such as Hurrah, die Butter ist alle! (Hurrah, the Butter Is All Gone!). Quoting ­Hermann Göring's statement about iron making people strong (and butter only making them fat), Heartfield showed a family consuming pieces of metal.

Adolf Hitler's 1936 Summer Olympic Games: In May 1931, the International Olympic Committee awarded the 1936 Summer Olympics to Berlin. The Nazis schemed to exploit the Olympics by portraying Nazi Germany as a peaceful member of the international community. Prior to the Summer Games, Adolf Hitler ordered the removal of vicious anti-Jewish signs throughout Berlin, such as "Jews are not wanted in this place." As a token, he allowed one German Jewish athlete to participate. Through the veneer, many saw the ugliness of Nazi racism. One German official groused that the Americans were letting "non-humans, like [sprinter Jesse] Owens and other Negro athletes," compete.

The Japanese continued their World War II offensive in China, while Adolf Hitler attained more power in Nazi Germany. Continue to the next page for a detailed timeline on the important World War II events that occurred from July 29, 1937, to August 1938.