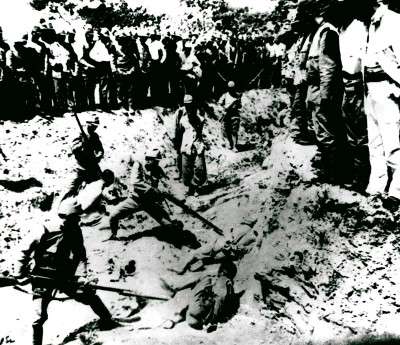 Nazi Germany's World War II offensive continues with their occupation of the rest of Czechoslovakia: Bohemia and Moravia. Tensions with Poland escalate, and Adolf Hitler orders his generals to develop plans for war. Continue reading the World War II timeline below to learn about additional events that took place from January 12, 1939, to April 7, 1939.

January 24: Hermann Göring establishes the National Central Office for Jewish Emigration, and orders the SS leadership to step up the evacuation of German Jews.

March 17: In the company of the White House press corps, President Franklin Delano Roosevelt underscores the importance of amending the U.S. Neutrality Act.

March 25: Because the Polish government will not subordinate the country to Nazi Germany, Adolf Hitler directs his generals to develop plans for war.

March 29: In a response to Nazi Germany's posturing over Danzig, Warsaw announces that the Polish army would retaliate against any attempt to take the port.

April 3: Fall Weiss (Case White), the Nazi war plan for the invasion of Poland, is completed. The plan, scheduled to be implemented on September 1, calls for a three-front attack that would end with the capture of Warsaw.

April 7: Italy invades the small Adriatic nation of Albania. The Italians will capture the capital of Tiranë within a day.

Spain signs the Anti-Comintern Pact, aligning itself with Japan, Nazi Germany, and Italy.

Below are more highlights and images that outline the events of World War II and show the details of the Japanese troops taking Peiping, as well as the mass killings in the Chinese capital in the late 1930s.

Japanese take Peiping and change its name to Beijing: The Chinese city of Peiping fell to Japanese troops on July 29, 1937, only 22 days after the start of the Second Sino-Japanese War. Chinese defenders offered little resistance as the enemy closed in on the major cities of Peiping and Tientsin. The former had been the capital of China until the government moved to Nanking in 1928. During the Japanese occupation, Peiping's name was changed to Beijing and was made the capital of the provisional government of the Republic of China. A puppet regime ruled northern China until the Japanese abandoned Beijing in 1945.

The Japanese Imperial Army commits mass killings in Nanking: Although outnumbered by almost two to one, the Japanese Imperial Army captured the Chinese capital of Nanking on December 13, 1937. They entered the city with orders to "kill all captives." Because they were trained to fight until death, Japanese soldiers saw surrender as an act of cowardice and therefore treated the surrendering Chinese soldiers with contempt. Moreover, as representatives of the emperor, Japanese soldiers believed that the citizens of the nations they conquered were less than human and deserved rape, torture, and death. Within six weeks, tens of thousands of Chinese soldiers and civilians in Nanking were killed, with many buried alive.

The Rape of Nanking: As Japanese soldiers overtook Nanking, they trucked Chinese prisoners of war to the outskirts of the city. Japanese officers ordered their men to torture and kill these prisoners so as to banish any feelings of humanity that a Japanese soldier may still hold for his captives. Many photos, such as this one of prisoners being killed during a bayonet drill, were taken of the slaughter. Very few Japanese soldiers refused to carry out the barbaric orders. Failure to do so meant immediate death.

Nazi German propaganda poisons young German minds: "The Jew is the most dangerous poison mushroom in existence," a pious mother teaches her son in this 1938 children's book, which was illustrated by the anti-Semitic cartoonist "Fips" (Philip Rupprecht). The success of Julius Streicher's political newspaper allowed him to publish such books as Der Giftpilz (The Poisonous Mushroom) to educate German youngsters in proper Nazi attitudes. Determined to have children well-indoctrinated before adulthood, the Nazis built propaganda into the school curriculum, screened teachers for adherence to the party line, and shaped science programs around their notions of "blood purity."

Nazis use propaganda campaign to press for union with Austria: Following the assassination of Austrian Chancellor Engelbert Dollfuss by the Nazis in 1934, the new chancellor, Kurt von Schuschnigg, tried to maintain Austria's independence and constitutional government. Within Austria, Nazi pressure for union with Nazi Germany escalated, and was reinforced by a relentless propaganda campaign (pictured) that pushed for a "yes" vote on union. Eventually, in 1938, the Anschluss preempted a democratic outcome when Arthur Seyss-Inquart -- the pro-Nazi interior minister -- "requested" the German invasion. Subsequently, Arthur Seyss-Inquart supplanted Kurt von Schuschnigg as Reich governor of Austria.

Nazi Germany and Poland took another step toward war, and Hungary withdrew from the League of Nations. Continue to the next page for a detailed timeline on the important World War II events that occurred from April 11, 1939, to May 27, 1939.

A new conscript became a full-fledged soldier in three months in the battle area. We planned exercises for these men. As the last stage of their training, we made them bayonet a living human.

When I was a company commander, this was used as a finishing touch to training for the men and a trial of courage for the officers. Prisoners were blindfolded and tied to poles. The soldiers dashed forward to bayonet their target at the shout of "Charge!" Some stopped on their way. We kicked them and made them do it.

After that, a man could do anything easily. The army created men capable of combat. The thing of supreme importance was to make them fight. It didn't matter whether they were bright or sincere. Men useless in action were worthless. Good soldiers were those who were able to kill, however uncouth they were. We made them like this.

Good sons, good daddies, good elder brothers at home were brought to the front to kill....Human beings turned into murdering demons. Everyone became a demon within three months.