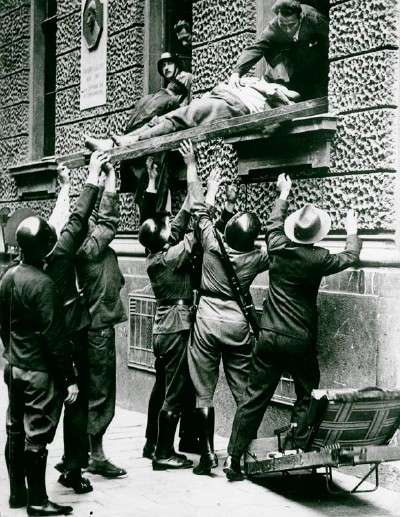 Nazi Germany's anti-Semitic views during World War II began to emerge when Nazi Germany adopted the swastika for its national flag and the Nuremberg Laws in 1935. The World War II timeline below summarizes these events and other important events that occurred from December 1, 1934, to September 15, 1935.

January 7, 1935: France undercuts international efforts to censure Italy for its actions in Abyssinia when it enters into a treaty with Rome. France thinks it is buffering itself against Adolf Hitler's aggression, but it is actually giving also-dangerous Benito Mussolini carte blanche in Northeast Africa.

March 1935: Adolf Hitler publicly repudiates the Treaty of Versailles, announcing that he will not adhere to the limits on the German military imposed by the treaty.

May 2, 1935: Berlin is incensed by a mutual assistance treaty signed between Russia and France that would serve to force Nazi Germany into a two-front war. Russia will enter into a similar agreement with Czechoslovakia within the month.

July 28, 1935: Boeing's B-17 Flying Fortress, a heavy bomber that will become the workhorse of the war's signature European bombing raids, makes its maiden voyage.

August 31, 1935: President Franklin Delano Roosevelt signs the U.S. Neutrality Act, prohibiting material support for any side in a European war. FDR famously predicts that the act "might drag us into war instead of keeping us out."

September 1935: Nazi Germany adopts the swastika, an ancient symbol representing life, power, and luck, for its national flag. The Nazi Party had already co-opted the swastika in the 1920s, radically altering its symbolism.

September 15, 1935: The Nuremberg Laws, which impose strict limits on citizenship and civil rights for German Jews, are adopted.

Below are more highlights and images that outline the events of World War II and show the details of increasing anti-Semitic propaganda by the Nazis, as well as information about the Dollfuss assassination in the early 1930s.

Anti-Semitic propaganda begins in newspapers and on radio broadcasts: At a 1934 Nuremberg rally, Joseph Goebbels advocated mass-media propaganda to influence the public to follow "superior leadership." With the Nazis in power, many newspapers and radio broadcasts turned anti-Semitic. The political newspaper Der Stürmer (The Attacker) repeated the slogan "The Jews are Our Misfortune." Edited by Nazi politician Julius Streicher, the popular sheet featured cartoons by Fips (Philip Rupprecht) that portrayed Jews as swindling, money-hoarding sexual perverts. This 1934 special edition accused Jews of ritual murders of Christian children.

Triumph of the Will is German director Leni Riefenstahl's most famous work: "It is a documentary, not propaganda," German director Leni Riefenstahl declared after the war in defense of her most famous work, Triumph of the Will. Adolf Hitler had personally chosen Riefenstahl to film the German Nationalist Socialist Party conferences in Nuremberg in 1933 and 1934. She won numerous awards for Triumph, but had to defend her work to those who claimed it was the most insidious propaganda film ever made. Heavily choreographed, it opened with a sequence portraying Adolf Hitler as a god emerging from the clouds to address his followers.

The Thousand-Year Reich through a German Communist's perspective: The Thousand-Year Reich (1938), depicting the fundamental flaws in the Nazi state, was Hans Grundig's greatest masterpiece. The native German and his wife, Lea, were ardent Communists and critics of the Nazi regime. Lea Grundig escaped to Palestine in 1939, but in 1940 Hans Grundig was committed to the Sachsenhausen concentration camp. After the war, they returned to Dresden. There they were officially recognized for their art and as acclaimed political campaigners against fascism and repression.

Tensions build as German troops entered Rhineland, and Italy renounced its membership in the League of Nations. The World War II timeline on the following page details these and other important events from October 1935 to July 17, 1936.

Tin Soldiers in the Streets

The SA tavern was only a short distance away. The SA members often left there late and drunk and came over to our clubhouse to raise hell. But they were usually driven off with table and chair legs. My father usually led the counterattack.

I got my first impression of National Socialism as a child, when I saw SA model soldiers in a store window. There was also a tin Hitler with a moveable arm. A few days later these tin soldiers were parading through the streets in the flesh. They always carried the party flag right up front, and everyone had to greet them with a tip of the hat or a raised arm, just like that tin Hitler in the showcase.