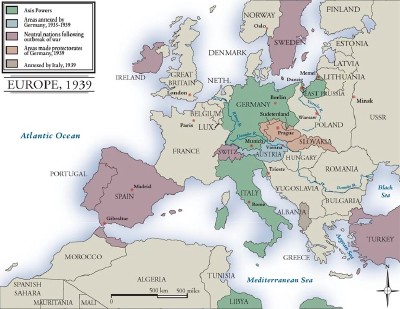 Europe was on the verge of World War II throughout the summer of 1939. Alliances were created, orders were given, and battle lines were drawn. The World War II timeline below explains the important events that took place during the last week of August 1939.

August 24: In a last-ditch effort to avoid war, President Franklin Delano Roosevelt sends a personal appeal to Adolf Hitler, asking him to address the Polish issue through diplomatic channels.

August 25: Poland and Britain sign a treaty in which they promise mutual assistance.

August 27: In a major conscription push, Britain calls for the enlistment of all men ages 20 and 21.

The German Heinkel He 178, the world's first jet aircraft, makes its maiden voyage, reaching a top speed of 403 mph.

August 29: Adolf Hitler agrees to sit down at the bargaining table with Polish leaders, but the next day Warsaw will send word that it will not be sending a delegation to Berlin.

The noose tightens further still around Poland with the Nazi occupation of Slovakia.

August 31: Nazi Germany insists that the time for negotiation with Warsaw has now passed, claiming that it has been "put off by the Polish side with feeble subterfuges and empty declarations."

With war imminent, Britain begins to evacuate large numbers of people from cities and towns and disperse them in the countryside. Britain mobilizes the Royal Navy and calls up naval reservists.

With the code words "Canned Goods" as the trigger, German operatives seize a radio station in Gleiwitz, Germany, and broadcast a message telling all Poles to attack Germans. The operation goes off smoothly, leaving the impression that insurgents were attacking Germans, and giving Adolf Hitler one more contrived pretext for war.

Below are more highlights and images that outline the events of World War II and show Europe's division of power before the war, as well as the details of Japan's conflict with the Soviet Union in the late 1930s.

A map of Europe before World War II: Throughout the summer of 1939, Europe teetered on the brink of war, while from 1933 Adolf Hitler and the Nazis -- and therefore a resurgent and militarily reinvigorated Nazi Germany -- became increasingly more powerful. In 1935 Nazi Germany regained control of the Saar Basin; in 1936 it remilitarized the Rhineland; in 1938 the Anschluss subsumed Austria into Greater Germany. Nazi Germany also annexed the Sudetenland in 1938 and Memel in 1939. Meanwhile, Nazi Germany's 1939 "Pact of Steel" with Italy and its nonaggression pact with Soviet Russia ensured the security of its southern and eastern borders in the event of war. Elsewhere, Franco's German-supported nationalists were finally triumphant in Spain's three-year civil war.

Japan pushes its luck with the Soviets and suffers severe setbacks: Following Japan's victory over Russia in 1905, the latter had to make a number of concessions. The Russians withdrew troops from Manchuria and recognized that Korea was in the Japanese sphere of influence. As Japan pursued its policy of expansion into Asia in the 1930s, its leaders underestimated the military strength of the USSR. This belief was reinforced when the Soviets offered little resistance to Japanese probes along its borders. Japan would soon suffer severe setbacks, however, at the hands of a revitalized Soviet Union army. Here, Soviet Union troops and armor go on the attack in the summer of 1939.

Poland's large army not prepared for a modern war of maneuver: Although Poland had the fifth-largest armed forces in Europe, including an army of a million men with almost 500 tanks, it was unprepared for a modern war of maneuver. In fact, it still included many horse-mounted fighting units. Despite the inevitability of war, Poland mobilized late to avoid being blamed for an outbreak of war. Only 17 of 30 mobilized divisions were fully deployed by August 31. Finally, despite having well-prepared defensive positions, these were dispersed too widely to present a cohesive and viable defense against a mobile fighting force -- especially the powerful Wehrmacht.