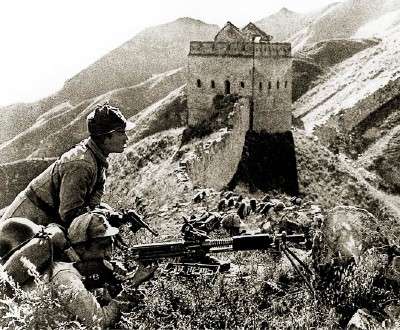 The buildup of World War II increased when Adolf Hitler acquired more power by becoming chancellor of Nazi Germany in January 1933. The World War II timeline below summarizes important events that occurred from January 30, 1933 to October 14, 1933.

February 4: Adolf Hitler tightens his absolute power in Nazi Germany with the decree "For the Protection of the German People," which gives the Nazis the authority to censor publications and ban political agitating.

March 20: SS chief Heinrich Himmler announces the establishment of Dachau, the first Nazi concentration camp. The camp will receive its first inmates, political prisoners, within the next few days.

March 27: Japan announces that it will no longer be part of the seemingly impotent League of Nations.

April 1: Adolf Hitler orders a boycott of all Jewish-owned businesses in Nazi Germany. The boycott itself fails when most German citizens ignore it, but Adolf Hitler will follow with a series of laws that effectively strangle the civil liberties of German Jews.

April 7: With the passage of the Aryan Law, any German who is one-quarter or more Jewish is barred from civil service employment.

July 14: All German political parties except the Nazi Party are outlawed.

October 14: Nazi Germany announces that it intends to follow Japan's lead and withdraw from the beleaguered League of Nations.

Below are more highlights and images that outline the events of World War II and show the details of the Nazi's increasing power, as well as Japan's military offensive against China in the early 1930s.

The Reichstag fire: Less than a month after Adolf Hitler was appointed chancellor, arson gave the Nazis an excuse to suspend civil liberties and crack down on their political enemies. On February 27, 1933, the Reichstag (parliament) building in Berlin went up in flames, and a Dutch Communist found at the scene was charged with the crime. Claiming that acts of terrorism were about to break out all over Nazi Germany, the Nazis imposed martial law, made mass arrests, and carried out summary executions. Many historians believe that the Nazis set the fire themselves.

The Kwangtung Army captures Shanhai Pass of the Great Wall: Once the Japanese established the puppet government of Manchukuo, the Kwangtung Army turned its attention to the northeast provinces of China. It achieved its first objective, the capture of Shanhai Pass -- the easternmost stronghold of the Great Wall -- on January 3, 1933. After Japan took the Chinese province of Jehol on March 1, Chinese troops attempted to make a stand along the Great Wall, but Japan drove them from the Wall by May 12. Representatives of both countries signed the Tanggu Truce on May 22, the provisions of which entirely favored the Japanese. China relinquished Jehol and agreed to a 100-mile-wide demilitarized zone south of the Great Wall.

Nazi Germany continued to gain strength and Benito Mussolini built up his Italian military. Go on to the next page for a detailed timeline highlighting the important World War II events that occurred from November 1933 to December 1934.

Evolution of the Japanese Government

The arrival of U.S. Commodore Matthew Perry in 1853 during a time of fear of Western colonization inspired a radical change in Japan's government structure. For more than 260 years, power had been vested in the decentralized Tokugawa shogunate, while the Imperial Court in Kyoto had remained mostly symbolic.

Recognizing that Japan's continued autonomy depended on a unified nation and a centralized government, a cadre of nobles and former samurai forced the collapse of the much-weakened Tokugawa shogunate in 1868. Nominal authority was returned to the emperor in what became known as the Meiji Restoration, though real power remained in the hands of the samurai activists who had overthrown the Tokugawa shogunate and seized control of the new government.

The new government forced the dissolution of some 250 semi-autonomous domains, and brought all territory under central control. Reform continued in 1889 when the Meiji Constitution established a rather ineffective two-house legislature (the Diet) and a politically powerful cabinet of ministers under the emperor. The system suffered from fundamental weaknesses in that the ministers did not have to answer to the Diet. As before, real power remained with the ruling clique of insiders.

During the period of Emperor Taisho (1912-26), a democratic movement briefly shifted influence to the parliament and democratic parties. However, economic depression in the 1920s and the rising assertiveness of the military soon stifled that movement.

The army and navy already exerted great political influence through their own cabinet ministers. Moreover, the emperor's passive role in government allowed the militarists to flourish. The military also claimed immunity from civilian control on grounds that only the emperor was commander-in-chief of the armed forces. Political leaders who opposed the militarist agenda were targeted for assassination by radical young officers.

The military demonstrated its disdain for civilian control in 1931 when the Kwangtung Army seized Manchuria without even consulting its own government. By 1941, when General Tojo was named prime minister, Japan was essentially a military autocracy.