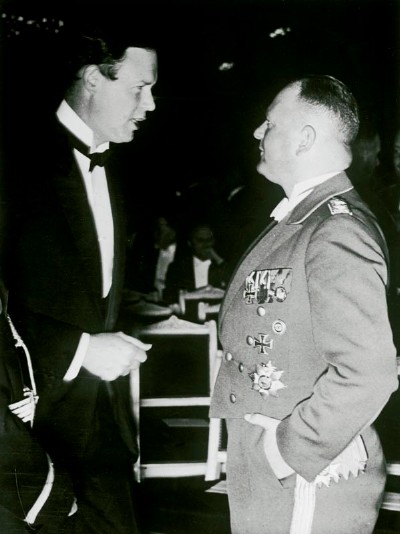 Between July 1937 and February 1938, the Japanese World War II offensive campaign continued in China, and Adolf Hitler became commander-in-chief of the German armed forces as well as German war minister. Continue reading the World War II timeline below to learn more about events that took place from July 29, 1937, to August 1938.

September 7, 1937: In a speech underscoring a perceived need for Lebensraum (living space), Adolf Hitler claims that Nazi Germany "is too small to guarantee an undisturbed, assured, and permanent food supply."

December 1937: Japanese troops pillage the Chinese Nationalist capital of Nanking, murdering tens of thousands of civilians, in what will become known as the "Rape of Nanking."

March 12, 1938: The Anschluss, the annexation of Austria into Greater Germany, begins as a large contingent of German troops enters Austria. The Anschluss ostensibly reunites the ethnically similar cultures, and many Austrians welcome the German soldiers.

June 1938: In a remarkably ill-advised attempt to bog down invading Japanese forces, Chiang Kai-shek orders the destruction of dikes along the Yellow River. The ensuing flood leaves two million homeless; destroys more than 4,000 cities, towns, and villages; and leads to a devastating famine.

August 1938: The German government decrees that all Jews must add Israel or Sara to their first names for ease of identification.

Below are more highlights and images that outline the events during the buildup of World War II in the mid-1930s.

Nazi TV hails Adolf Hitler and tries to win over German hearts: The Nazis claimed television as a great achievement of German technology. In March 1935, Reich director of broadcasting Eugen Hadamovsky described its mission: "to plant the image of the Führer indelibly in all German hearts." In 1936, 150,000 Berliners paid one Reichsmark each to enter special viewing halls for up to eight hours of TV. Later programming included a broadcast of the Nuremberg Rally, being filmed here. During the war, TV sets in military field hospitals provided cabaret and newsreels for wounded soldiers.

Erhard Milch works secretly on the Luftwaffe: In violation of the Treaty of Versailles, Erhard Milch worked secretly with Hermann Göring to build German planes and train pilots. Erhard Milch's practical skills contributed to the powerful Luftwaffe, which devastated European cities at the beginning of the war. To conceal that his father was Jewish, Erhard Milch produced an affidavit by his mother that she had committed adultery. One of America's staunchest isolationists, the famed aviator Charles Lindbergh, considered the Luftwaffe invincible.

"Degenerate" art exhibit draws more than three million visitors: In a 1935 Party Day speech, Adolf Hitler praised artworks that bore "the cultural stamp of the Germanic race." His favorite artists either realistically depicted healthy, handsome Aryans or disparaged Jews. The Nazis cleansed German museums of "inferior" modern styles. Their 1937 Entartete Kunst (Degenerate Exhibit) of unacceptable art -- which included Large Kneeling Woman by Wilhelm Lehmbruck along with works by Chagall, Kandinsky, Klee, Mondrian, Munch, and others -- opened in Munich and traveled to 11 other German and Austrian cities. It was a hit, drawing more than three million visitors.

A trial run for German military in Spain: German Condor Legion soldiers move an artillery piece in Spain. German intervention in Spain's civil war in 1936 ensured Franco's nationalist victory, and thus provided Adolf Hitler with an important and supportive -- if generally passive -- Fascist ally. Additionally, German intervention facilitated battle-testing of a whole range of the Wehrmacht's new weapons, vehicles, and tactics. The Luftwaffe's capability was demonstrated most dramatically when waves of the Condor Legion's Heinkel, Junkers, and Messerschmitt bombers and fighters devastated Guernica -- a Basque town without any air defenses. Some tanks of Nazi Germany's new panzer divisions were also given successful trials in Spain.

In January 1939, more than 300,000 German Jews fleed the nation in the face of Nazi hostility. Continue to the next page for a detailed timeline on the important World War II events that occurred from September 15, 1938, to January 5, 1939.