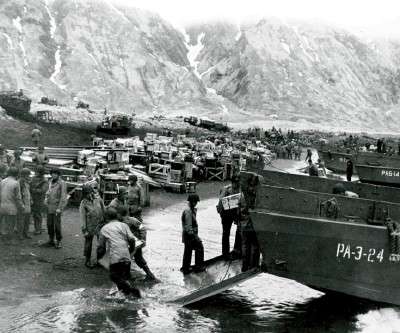 In April 1943 the Jews of Warsaw's ghetto rose up against their Nazi oppressors, a courageous act that drew brutal reprisals. The following World War II timeline discusses this and other pivotal World War II events from April 1943.

April 18: In the midst of calls by the Polish government-in-exile for an investigation into the Katyn massacre, the Soviets attempt to save face by blaming the Nazi Gestapo.

The Allies shoot down 69 Luftwaffe planes en route to Tunisia into the Mediterranean in a 10-minute dogfight. The Allies lose just nine of their own planes in the process.

Japan's Admiral Yamamoto, commander in chief of the Japanese Combined Fleet and the mastermind behind the attack on Pearl Harbor, is shot down and killed over the Solomon Islands by American P-38 Lightnings.

April 19: A force of more than 2,000 SS men under General Jürgen Stroop, sent by SS chief Heinrich Himmler to empty the Warsaw Ghetto, are unexpectedly driven out by lightly armed Jewish residents.

April 21: Responding to rumors that the Japanese are executing American POWs, President Franklin Roosevelt promises to follow through with his plan to prosecute war criminals.

April 23: Adolf Hitler demands "utmost severity" from his SS troops in their suppression of the Warsaw Ghetto uprising.

The Allies establish a London-based command under British Lieutenant General Frederick Morgan to plan an invasion of Axis-controlled Europe.

Below are more headlines and images detailing events of World War II and the Axis and Allied campaigns of 1943.

American fears lead to invasion of Attu: Soldiers unload supplies during the invasion of Attu. The recapture of this remote, inhospitable island in the American Aleutian chain (off Alaska) cost the lives of 549 Americans from May 11-31, 1943. The operation was prompted by fears that the island -- seized by the Japanese in June 1942 -- could serve as a base for air attacks on the U.S. mainland and threaten sea lanes between Seattle and the Soviet Union. Hindsight indicates that the invasion was driven as much by national pride and a determination to eject Japanese occupiers from American soil than by any overwhelming strategic concerns.

Chinese, Japanese battle in Burma: Chinese soldiers battle Japanese units along the Salween River in Burma in June 1943. Spurred by American insistence, 16 Chinese divisions commanded by General Wei Li-Huang crossed the river on the night of May 11-12, 1943. Their mission was to trap enemy forces by seizing key terrain north and south of the Burma Road. Fierce Japanese resis­tance slowed the attack. Chinese forces to the south reached the outskirts of Lung-ling on the Burma Road in early June before a counterattack pushed them back. Lacking adequate supplies, the Chinese offensive finally stalled.

See the next section for a detailed timeline on the important World War II events from early May 1940.