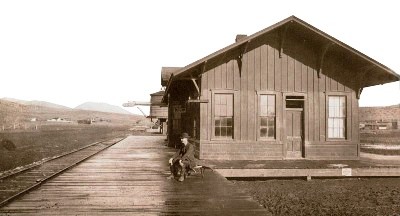 Railroad stations were often the outposts of civilization. For isolated people, the station meant contact with the rest of the country by telegraph, and trains meant the freedom to come and go-even if it was a long wait.
Hans Halberstadt

As the Civil War intensified, Lincoln and the country wrestled with the question of how to connect the existing railroad network in the Midwest with California. During the spring of 1862, the House and Senate passed the Pacific Railroad Act, authorizing land grants and loans varying from $16,000 per mile of flat prairie railroad to $48,000 per mile of difficult mountain track. That made the project a "pay-as-you-go" program, creating wealth out of the very land made accessible by the railroad.

In California, four transplanted Yankee businessmen -- Leland Stanford, Charles Crocker, Collis Huntington, and Mark Hopkins -- formed the Central Pacific Railroad to begin carving a path for the iron horse through the granite Sierra and the hauntingly beautiful high desert of Nevada. Meanwhile, Congress incorporated the Union Pacific Railroad to build a line from the Missouri River to a connection with the Central Pacific.

There was nothing technologically novel about the project. Railroad engineering by that time was well understood, and the hardware available "off the shelf." It was the sheer scale of the endeavor that was audacious, as virtually every scrap of iron and tool for both railroads had to be hauled thousands of miles to the remote railheads. On the Central Pacific line, almost everything came by ship -- a 17,000-mile journey around Cape Horn. But the race was on, and each railroad became so proficient that it sometimes laid more than five miles of track a day at the rate of 2,500 ties, 350 rails, 10,000 spikes, and 3,400 bolts per mile-every one put in place by hand. 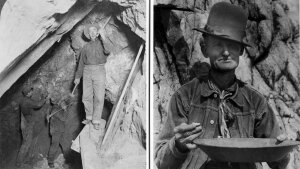