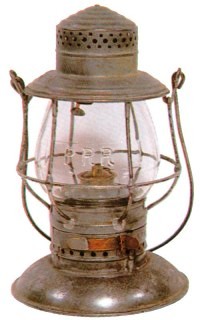 To a working railroader of the 1890s, a sturdy railroad lantern provided illumination, a means to signal and on the coldest nights, a tiny bit of warmth.
John B. Corns

Railroads also varied between fairness and harshness in their dealings with their workers. Some executives believed in paying a living wage and accepted the right of employees to form labor organizations and bargain collectively. Others took the view that labor was a commodity to be purchased at the lowest cost without regard for the individuals involved.

The economic depression of the 1870s brought these practices into sharp relief, when the Pennsylvania Railroad and other roads in 1877 reduced wages by 10 percent while preserving dividend payments. Train and engine crews went on strike in protest, and violence flared as state militias were dispatched to keep the trains running. So great was workers' hostility towards the Pennsylvania Railroad that riot damage to its property totaled more than $2 million.

The social discontent revealed by the Strike of 1877 frightened leaders and citizens alike. Serious strikes in 1888 and 1894 further polarized railroad labor and management, as they revealed the human cost of laissez-faire capitalism and rapid industrialization.

Throughout the period, crafty railroad promoters manipulated Wall Street and found ingenious ways to fleece investors. Rascals such as Daniel Drew, who bled the Erie Railroad of tens of millions of dollars, gave rise to the term "Robber Baron" and personified corporate America to the average worker.

In fairness, it should be noted that most executives were honest and sincerely interested in building their companies. And although railroading created millionaires at a fantastic pace, many railroad fortunes were the basis for great philanthropic works. Stanford University, The Johns Hopkins Hospitals, and art museums throughout the country are just some of the institutions created from the bequests of nineteenth-century railroad leaders.

As the country emerged from the Civil War, perhaps 150,000 men and women worked for railroads, with thousands more (no one knows how many) engaged in collateral work. By 1900, the number of railroad employees exceeded one million, with tens of thousands making a living in related fields, such as producing railway supplies. These railroaders were men and women of all races, faiths, and political persuasions.

These men are building a pier for the UP's Green River, Wyoming, bridge the same way they built the entire railroad: by hand. Skilled stonecutters shape the rock, while masons and laborers wrestle it into place with the help of a hand derrick.
Union Pacific Railroad Museum Collection

There was discrimination, to be sure. Blacks and Latinos could be firemen but not engineers; skilled trades and union membership were open to a select few; sometimes jobs were assigned on the basis of religion; and the most recent immigrants usually held the dirtiest, most hazardous, and lowest-paying jobs. The railroad was a mirror of American society at large, with all of its imperfections and opportunities, but it was also a tool for nation-building.

Nowhere was that more evident than in the task of carrying immigrants to their new homes. Some railroads actually employed agents in Europe to recruit entire families and villages to settle the vast tracts of farmable land served by the company's tracks. Other lines provided special trains to meet the ships that brought more than 8 million new Americans into the country between 1870 and 1900. Almost 789,000 immigrants arrived in 1882 alone, and most journeyed at least some distance by rail. The extensive reach of the railroad network meant that these new Americans could spread throughout the country, rather than concentrating in the eastern cities. Railroads, in effect, stirred the melting pot.