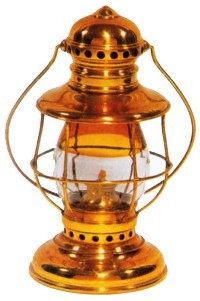 Most hand lanterns were made of pressed steel or tinplate. A few, often called "presentation lanterns" because they were retirement or promotion gifts, were of brass. Style-conscious train crews might use a fancy lantern as a snow of pride.
John B. Corns

On November 18, "The Day of Two Noons," when railroads (and many cities) adopt Standard Railway Time -- the basis for our time zones today.

A record total of 12,876 miles of track is laid in the United States; the amount would never be surpassed.

The Railway Safety Appliance Act is signed into law, improving worker safety over the next two decades.

A strike at the Pullman Palace Car Company spreads nationwide.

General Electric installs the first mainline railroad electrification in America on the B&O in Baltimore.­